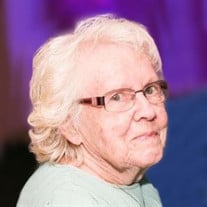 Jeraldine “Jeri” Rae Cooper, 82, of Elk Rapids, MI, passed away on January 22, 2018. Jeri was born on August 9, 1935 in Jackson MI to the late Paul Ray and Marian (McLaughlin) Johnson. Jeri lived on the family farm with her sister Janet and her parents where she and her sister played with cousins, picked asparagus, and gardened, and played ball in the cornfields. Jeri graduated from East Jackson High School. She married Edward “Ed” Robert Cooper Jr. on June 30, 1956. The couple raised 3 children and celebrated 61 years of marriage together. She was a loving and faithful wife who worked while supporting Ed through Engineering School at Michigan State University and during completion of his Nuclear Engineering training and certification. The Army reserves and Ed’s career gave Jeri the opportunity to live in many locations…most were cities in Michigan while raising her family and keeping the home fires burning! New communities, friends and experiences, Jeri took on with gusto and enthusiasm. She created a seamless family transition every time as her children’s happiness and adjustment were always her top priority. Her kids would say she was a GREAT Mom and this was one of her greatest gifts and strengths! Everyone who knew her well would say she was kind, sweet, caring, selfless and loved by all! As her kids grew up and moved on with college - work- life, Jeri worked part time for American Greeting Cards in Jackson, MI. Jeri and Ed retired early and spent many years at their lake home in Elk Rapids and their winter Florida residences where she had a love / hate relationship with her golf game and she enjoyed knitting, reading, playing board and card games and multiple activities with friends. Over the years, her children and their families spent lots of time in Northern Michigan together as well as tailgating for MSU football home games. She was an avid fan of MSU football and basketball, Detroit Tiger baseball and Red Wings hockey. She fought her long illness with great courage, grace and dignity…she made us proud! Family remained her top priority to the end. Jeri is survived by her husband, Ed; daughter, Cindy Rae (David) Della Vedova of Traverse City; sons, Edward Robert (Kathleen) Cooper III of Downers Grove, IL., Stephen Paul (Tanya) Cooper of Grandville, MI.; 4 grandchildren, Edward Robert (Fiancé Meg) Cooper IV, Sarah Lynn (Jason) Havrilla, Nathan Avery Poll, Chloe Mae Cooper; and great grandson, Jase Jonathan Havrilla; brother-in law, Richard Turner; nephews, Rick and Rowdy Turner; great nephew, Rex and great nieces Autumn and Harley of Battle Creek, MI. She is preceded in death by her sister Janet Turner in 2016. The support of the Cooper family has been endless…we thank you so, so much! We would like to express our deep gratitude to the dedicated staff at Comfort Keepers and to the amazing people at The Grand Traverse Pavilions and Cottages who have supported and cared for (and about) our entire family! Thank you! A private family gathering will be held on Saturday, January 27, 2018 for immediate family only. Burial will be held at the Maxon Cemetery in Jackson at a future date. Please share your thoughts and memories with Jeri’s family by way of her online guestbook at www.reynolds-jonkhoff.com. The family is being cared for by the Reynolds-Jonkhoff Funeral Home and Cremation Services.

The family of Jeraldine "Jeri" R. Cooper created this Life Tributes page to make it easy to share your memories.