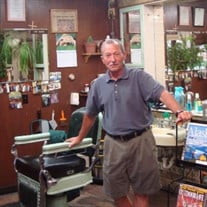 Jere Lynn Brown, 68, of Traverse City passed away peacefully on February 11, 2022. Jere was born in Alpena, Michigan on June 6, 1953 to the late Donna Margie McKenzie and Harold Lewis Brown. He was the second oldest of five children, adored his mother, and remained close to his loving sister Jenny (Richard) Bebout throughout his entire life. On January 27, 1985 he married the love of his life, Linda Jean Hebert. He owned Jere’s Barber Shop where he worked for 34 years in Traverse City. He took great pride in getting to know his community, not just as a barber, but a friend to any who walked into his shop. He was a proud 3rd degree member of the Knights of Columbus, a talented barber, delightful story-teller, and was always waiting for another audience to make laugh with a joke. He will be missed deeply by those who were lucky enough to know him. He was a lover of the outdoors especially lakes, fishing, and hunting. He was the president of the Sanford Lake Association for many years. He was an avid reader, a lover of animals, had a green thumb, and a kind heart. There is nothing that brought him more joy than his family. He is survived by his wife, Linda Hebert-Brown, who he loved for 38 years; and his three daughters that were his greatest pride Jessie Brown-Bungartz, Jodie Brown-Yosef, and Jena Brown-Pailet. He deeply loved and was deeply loved by his grandchildren Friedrich, Elijah, Lucy, Georg, with another baby boy Brown-Pailet on the way. He was also survived by his nephew Tom Bebout and was preceded in death by his niece Melissa Bebout-Schmitz. The memorial service will be held on Saturday, February 19, 2022 at 11:00 am with visitation beginning at 10:00 am at the Reynolds Jonkhoff Funeral Home. Memorial contributions may be directed to the Cherryland Humane Society in honor of his love for animals.

Jere Lynn Brown, 68, of Traverse City passed away peacefully on February 11, 2022. Jere was born in Alpena, Michigan on June 6, 1953 to the late Donna Margie McKenzie and Harold Lewis Brown. He was the second oldest of five children, adored... View Obituary & Service Information

The family of Jere Lynn Brown created this Life Tributes page to make it easy to share your memories.