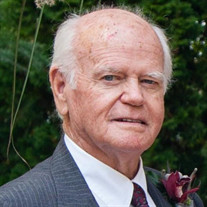 Jerome Frederick Allore, 85, of Traverse City passed away Monday, March 1, 2021 at Munson Medical Center with his loving wife Therese Mary Allore (Alm) and his children at his side. Jerome was born on April 5, 1935 in Muskegon, MI to the late Joseph and Mary Allore. He is survived by his sister Mary Lou Osborn and brothers Harry and Larry Allore. Jerome graduated from Muskegon High School in the Class of 1953 and was a member of the Muskegon Big Reds 1951 Championship Football Team. He received a Bachelor Degree from Central Michigan University in Chemistry and Math. He had a Master’s Degree in Administration from Kalamazoo College. He married the love of his life Therese Mary Alm on November 9, 1957. They had five children; Christopher Allore, Lisa Allore, Timothy Allore, Susanna Piscatella, and Daniel Allore (Kate). Jerome had an extensive career in the Education Field. He began as a teacher at Muskegon Catholic Central and later promoted to Principal and then Assistant Superintendent. He moved the family to Traverse City in 1969 and became Superintendent of the Grand Traverse Area Catholic Schools (GTACS). In 2014 he was added to the GTACS Hall of Fame for the innovated programs he helped create. Jerry became Superintendent of the Harbor Springs Public Schools in 1979 and would eventually retire as the IOSCO Intermediate Schools as Superintendent in Oscoda. Jerome coached many students in various sports with Track being his favorite. While attending Muskegon Community College he excelled in the hurdles. Jerome was a wonderful family man. His hard work ethic, gentle smile and sense of humor will be deeply missed by all who knew him. Therese and Jerry loved to travel. First they traveled all over the USA and Canada in a station wagon and a tent with their five children. Once the nest was empty, the two of them traveled to many different countries. In his retirement years Jerome's greatest joys came from spending time with his grandchildren: Adam, Brian, Ashley, Carly, Cassie, Philip, Tori, and Jessica. And later with his great grandchildren: Annalyn, Aiden, Gwendolyn, Leland, Kaytrin, James, Charlotte, and Nova . Visitation begins at 10:00 AM Saturday, March 6, 2021 at Immaculate Conception Catholic Church in Traverse City with Mass following at 11:00AM. Memorial contributions may be directed to the Father Fred Foundation.

Jerome Frederick Allore, 85, of Traverse City passed away Monday, March 1, 2021 at Munson Medical Center with his loving wife Therese Mary Allore (Alm) and his children at his side. Jerome was born on April 5, 1935 in Muskegon, MI to the... View Obituary & Service Information

The family of Jerome Frederick Allore created this Life Tributes page to make it easy to share your memories.