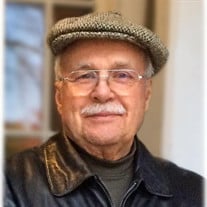 Jerome Arthur Colligan passed into eternity peacefully in his home with the love of his family on February 26, 2021. Jerry was born January 15, 1939 in Ft. Wayne, Indiana to Joseph and Marie (nee Hoffman) Colligan and grew up in a traditional Irish Catholic Midwestern home with nine siblings. He graduated from Central Catholic High School in Ft. Wayne Indiana. He obtained a BS in Electrical Engineering from the University of Notre Dame and went on to complete an MS in Electrical Engineering, an MA in Mathematics and a PhD in Electrical Engineering at The University of Michigan. Jerry married the love of his life, Susanne Lothamer, in Coldwater, Michigan in 1963. Together they raised five children: Sarah Slade (Larry), Amy Colligan, Dr. Maria Carroll (Dr. Michael), Dr. Matt Colligan (Carrie) and Amanda Colligan. In addition to his wife and children, Jerry is survived by his grandchildren Zane, Dune, Henry, PJ, Mary Kate, Mya, Penn and Hazel. He is also survived by his siblings Margaret Oard, Dr. Francis Colligan, and Stan Colligan. He was preceded in death by his parents and his siblings Joan Robertson, Dr. Joseph Colligan, Dr. Paul Colligan, Charles Colligan, Mary Ortbals and Dr. Michael Colligan. Upon receiving his PhD in 1968, Jerry began an industrious career dedicated to excellence as a geophysicist with Exxon Exploration in Houston, Texas. In Houston he was actively involved in supporting the Civil Rights movement within the Houston Area Schools. He obtained his law degree at South Texas College of Law in 1975. In the spring of 1976 the family moved to Traverse City where Jerry practiced Oil and Gas Law for the next 44 years. He carried on with his traditional Catholic values through faithful dedication to his family by providing them a wonderful Long Lake home, many years of education and adventures in travel that covered most of the world. In addition Jerry served his community through the Grand Traverse Area Catholic Schools where he volunteered to teach math and worked on long range planning. He volunteered his professional services with the drug court to reduce incarceration. He served his church through a mission trip to Matagulpa, Nicaragua and as a lector. This service to the community earned him the inaugural Madeleine Thomas Humanitarian Award in 2004. In his later years he devoted time to Safe Harbor and the Outreach ministry of Central United Methodist Church where he washed dishes and enjoyed breakfast with the guests. He was good to all people without regard for status. Jerry was a consummate host to a house full of guests in all seasons. He enjoyed euchre, golf, sailing, cycling and Long Lake pontoon boat rides. He was a member of St. Patrick Catholic Church, Traverse City Golf and Country Club, Tau Beta Pi Engineering Honor Fraternity, Michigan Oil and Gas Association and the Notre Dame Club of Northern Michigan. A Funeral Mass will take place at 3 pm on Friday, March 5, 2021 at St. Patrick Catholic Church in Traverse City with Visitation from 1-3 pm preceding Mass. Social distancing and masks are requested. Please visit www.rjfh.tv to watch the livestream of the mass. A celebration of Jerry’s life has been POSTPONED that was supposed to take place on June 24, 2021 from 5-7 pm at the Traverse City Golf and Country Club. In lieu of flowers, memorial donations may be directed to Grand Traverse Area Catholic Schools or Safe Harbor of Grand Traverse. Through these services of farewell, we return to God the gift we have been given in Jerry and in his service to so many people.

Jerome Arthur Colligan passed into eternity peacefully in his home with the love of his family on February 26, 2021. Jerry was born January 15, 1939 in Ft. Wayne, Indiana to Joseph and Marie (nee Hoffman) Colligan and grew up in a traditional... View Obituary & Service Information

The family of Jerome Arthur Colligan created this Life Tributes page to make it easy to share your memories.

Jerome Arthur Colligan passed into eternity peacefully in his...