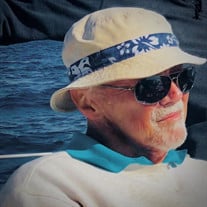 Gerald Auger, “Jerry”, to those who knew and loved him, passed away peacefully on January 18th, at the age of 79 surrounded by his family. Jerry was born April 12, 1941, the son of Edgar and Grace Auger. He met his wife, Kris, of more than 57 years at Ferndale High School. Best friends that married and followed a dream to live in Northern Michigan and start a business and a family. After moving to Traverse City in 1965, and purchasing the Beachcomber Motel, Jerry spent evenings plowing driveways to make a little extra money. Throughout his life Jerry’s entrepreneurial spirit took him down a path of developing new projects and purchasing existing businesses to breathe new life into them. Businesses such as Cutty Sark Harbor, The Embers, The Days Inn, The Traverse City Drive Inn, Shanty Creek and Schuss Mountain Resorts, The Beach Haus Resort, The Cove and Falling Waters Lodge and many others throughout the region. A modest man never looking for credit or accolades. He believed in a person’s word, honor, compassion, and a handshake. Known for his business savvy but even more so, his sense of humor and warm heart. Those who knew him knew his generosity of spirit and his surprising ability to say just about anything that crossed his mind or struck him as funny. Over the years, Jerry has quietly support his community through projects like the Easling Pool, The Dennos Museum, and the Cowell Cancer Center. An avid sailor, Jerry enjoyed many years sailing the Great Lakes with family and friends. His passion for sailing was infectious passing it along to his children, son-in-law and grandchildren. After retiring at the early age of 47, Jerry and Kris set sail for five years Down Island to follow his dream but always returning home to Traverse City and his family and friends. Jerry is survived by his wife, Kris, his children Mike and Jennifer (Dave) Ringl, his grandchildren Jessica, Sarah and Michael Auger and granddogs Opie and Fletch. Jerry will be deeply missed just as he was deeply loved. “In heaven, a sailboat just set sail, with Jerry at the helm and a cocktail in his hand!” Memorial contributions in memory of Jerry may be directed Munson Hospice House.

The family of Jerry Auger created this Life Tributes page to make it easy to share your memories.

Gerald Auger, “Jerry”, to those who knew and loved him, passed...