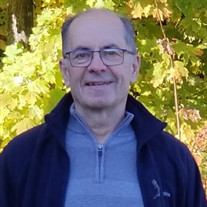 Jerry R. Conroy Empire Township – Jerry Robert Conroy, 74, passed away on January 18, 2020 at his home on Glen Lake after a 15-month long battle with Pancreatic cancer. Jerry was born in Syracuse, N.Y. on September 26, 1945 to Eva E. (Coleman) Conroy and Gerald J. Conroy. Upon graduating from Syracuse Central Technical High School, he studied and graduated from The State University of New York at Morrisville, and transferred to Western Michigan University in Kalamazoo, graduating with a BS degree in Automotive Engineering. Upon graduation, he joined Ford Motor Company in January of 1969. His first assignment was working in the Dynamometer Lab testing and evaluating race car engines. Having been a “gear head” from the age of eight – it was an ideal match. He moved to several different areas within the company and retired in February 28, 2007. He spent a year visiting various museums in and around Michigan. He then began working at Case New Holland in Burr Ridge, Illinois, retiring in March, 2014. From then on – it was a nothing but moments of enjoyment. He loved hiking known and unknown trails. He volunteered for the Park and Conservancy grooming trails in the winter, beach clean-up in the summer, restoring homes on Manitou Island. He was a member of a local golfing group; he enjoyed his wonderful friends - “The Car Guys.” He helped to restore old barns, and repair antique farm equipment. He enjoyed working in cemeteries in the county restoring and cleaning-up head stones and markers. Family and local history was very important to him. He was a member of the Antique Outboard Motor Club, both local and national chapters. He published the local chapter newsletter, and contributed to the national publication. After being diagnosed with cancer, he turned his attention to restoring some of the 50 antique outboard motors he had collected. He won several ribbons and took great pride in what he had accomplished and saved. He loved participating in various car shows and touring the area in RED E GO - his red 2007 Solstice convertible. In 1968, he married the love of his life, Kathy Massey. They had always been very good friends in High School and began dating in 1965. Together they had two wonderful daughters, Jennifer (Tom) Donnelly, and Kelli (Aaron) Kunec. He was so proud of his two granddaughters, Caitlin and Erin Donnelly. Jerry was always known for his warm smile, his kindness, caring, always willing to help, and his compassion for all. In addition to his immediate family, he leaves behind a sister Barbara Hollister, sister-in-law and brother-in-law Sue and Bob Kanerva and nephew Eric. Several other nephews and nieces in New York State, California, and South Carolina. He was preceded in death by his parents, infant granddaughter, Madison Donnelly, sister, Carol Austin, and niece, Jacqueline Kanerva. He was able to spend the last few hours of his life looking out at beautiful Glen Lake that he so dearly loved. There will be a celebration of Jerry’s life in the spring of 2020. In lieu of flowers please direct memorial contributions in Jerry’s honor to; Leelanau Conservancy, 105 First Street, Leland, MI 49654 or Port Oneida Community Alliance, 11101 S. Mann Road, Traverse City, MI 49684.

The family of Jerry Robert Conroy created this Life Tributes page to make it easy to share your memories.