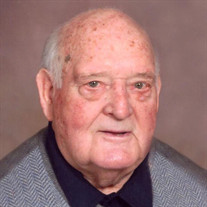 Gerald “Jerry” Thomas Denny, 86 passed away November 4, 2021. Throughout his 86 years, Jerry found enjoyment in many things. Catching fish, growing vegetables in the garden, hunting in Michigan’s great outdoors and making a mean pot of chili. Watching sports was a passion and he had fun hanging out with his buddies at the local barbershop. He loved nature and felt privileged to live in the magnificence of God’s country here on earth. It was a life he shared with his loving wife Gwen for the last 36 years. Together their favorite pastimes included watching sunsets, attending Empire United Methodist Church where they were faithful members, volunteering at the Empire Museum, being with friends and family and traveling. He was a collector of many things including tractors and was a member of the Lions Club. Life began for Jerry on September 20, 1935 in Empire, MI. He attended Empire Agricultural School and went through all grades in the same one room schoolhouse graduating in 1953. After graduation, he worked at General Telephone Company (later named GTE) for 35 years. He raised his family with his first wife, Bernita Newman in Davison, MI, moved to St. Louis, MI in 1985 and then returned to Empire to retire in 1992. Jerry will forever be remembered. He’s dad to Robin, Ric, Tammi and Todd Denny and Tina Quinlan, stepdad to Ellen Wilcox and Tim (Judy) Personious. He will be missed by all those who fondly call him grandpa, great grandpa and big papa. Jerry also leaves behind his sister Charlotte Harriger, sisters-and-brothers-in-law, many nieces, nephews and cousins, as well as neighbors, good friends and of course his main squeeze and love Gwen. Those who went before him and are sure to be rejoicing in his heavenly entrance include his parents Otto Denny and Juanita Freide, sisters Jean Plowman and Donna Lee Gilbert, as well as brothers-in-law Versel Harriger and Ned Plowman and grandson Charlie Cowley. Thank you to the staff at MediLodge TC for all their care and compassion during Jerry's 6-month stay. A funeral service honoring Jerry’s life will take place on Friday November 12, 2021 at 12:00pm at the Empire United Methodist Church. Visitation will take place one hour prior. Jerry will be laid to rest at Empire Maple Grove Cemetery, where his final wish was to be buried in a flannel shirt and blue jeans, so please feel free to wear the same. Memorial contributions may be directed to the Empire United Methodist Church or to the Glen Lake Fire Department. The family would like to thank the Emergency Personnel for their considerate care over the years for Jerry.

The family of Jerry Thomas Denny created this Life Tributes page to make it easy to share your memories.