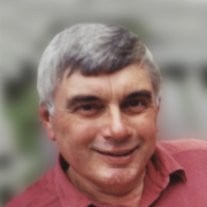 Traverse City-Jerry B. Hagaman, 70, died peacefully Monday afternoon, April 22, 2013, at his home with his family by his side. He faced his nine month battle with brain cancer as he lived his own life, with strength, courage, and dignity. Jerry was born on September 26,1943, in Romeo. He was the son of Burton and Ruth Hagaman. On February 17, 1968, he married the former Mary Jo Kucera in Traverse City. Together they raised their daughter Jodi. He attended and graduated from Oakland University where he received his degree in Mechanical Engineering. His career started in 1964, when he served as a Trainee for Ex-Cell-O Corporation. It then continued with Cone Drive Gear, where he worked his way up the ladder, serving in the following capacities: Product Engineer, Sales Engineer, Assistant to Chief Engineer, Customer Liaison Engineer, Manufacturing Engineering Manager, Assistant Director of Engineering, Director of Engineering. He retired in 1999, working as a consultant for a number of years. With his innovation in his chosen profession and knowledge, he was able to register a product patent. During his working years, he was acknowledged by his superiors as being a wonderful mentor to many, always dedicated to serving the needs of others and he demonstrated high integrity with a strong work ethic. After retirement, Jerry and Jo travelled the country by RV extensively, which proved to be a very happy time for both of them. After the travel bug wore off, they spent winters in Florida, until the lure of their grandchildren brought them back to Michigan. Jerry loved his morning walks in downtown Traverse City, and the many people he called his friends. His other interests and leisure pursuits were; woodworking, remodeling and restoring homes, days at the beach, cruising in his light blue 1964 1/2 Mustang Convertible and racing his beloved Stock Car # 11. He was always proud of his family centennial cattle farm in Romeo which consisted of 360 acres near 36 Mile Road across from the Ford Proving Grounds. Jerry's true passion in life was interacting with his family especially those incredible grandkids. His kindness towards others will live on through his family. Jerry will be forever loved and missed by his wife, Mary Jo Hagaman, of Traverse City; his mother, Ruth Hagaman, of Traverse City; his daughter Jodi (Chris) Overbeek, of Milan, Mi ; and his grandchildren, Josh, Caleb, and Emma. Also surviving are beloved aunts and uncles, cousins, sister-in-law, brother-in-law, and nieces and nephew. He was preceded in death by his father, Burton and his brother, Tom. At his request, cremation has taken place. A Memorial Service honoring Jerry, will be held at the Reynolds-Jonkhoff Funeral Home on Saturday, April 27, 2013, at 1:00 P.M., with visitation one hour prior to the service. Rev. Dale Ostema will serve as the celebrant. Burial will follow at Oakwood Cemetery. In remembrance of Jerry, memorial contributions may be directed to the American Cancer Society or to Women's Resource Center. Gift envelopes may be obtained at the funeral home. The family wishes to express their sincere gratitude to "Just Like Family" for their loving care given to Jerry. Words of comfort may be shared with the family at their online guestbook at http://www.reynolds-jonkhoff.com/ Arrangements were made with the Reynolds-Jonkhoff Funeral Home and Cremation Services.

Traverse City-Jerry B. Hagaman, 70, died peacefully Monday afternoon, April 22, 2013, at his home with his family by his side. He faced his nine month battle with brain cancer as he lived his own life, with strength, courage, and dignity.... View Obituary & Service Information

The family of Jerry Burton Hagaman created this Life Tributes page to make it easy to share your memories.