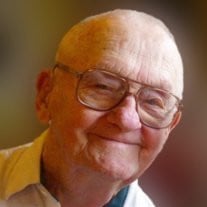 Jerry Adam Polach, 96, of Traverse City and formerly of Hoxeyville and Chicago, passed away peacefully on September 2, 2013 at Munson Medical Center. Jerry’s long life was enriched by deep family attachments, most particularly to his beloved wife Ella, who passed away one year ago during their 65th year of marriage, and also to their daughters Linda and Patricia, with whom he shared a strong bond, many good times and his last week of life. Jerry served as a tank gunner in the First Armored Division of the U.S. Army during World War II. He was captured with his entire unit at Kasserine Pass in Tunisia on February 14, 1943, during the Allies’ North Africa campaign. With other prisoners of war, he suffered great privation and hardship during 26 months in captivity, which had lasting effects on his health. After the war, he was active in the American Legion for many years and served as a post commander in Chicago. He was a long-time supporter of Disabled American Veterans for its work on behalf of disabled veterans, and he had great respect and appreciation for the professionals and staff of the Veterans Administration, who helped so many veterans including him. Jerry valued his Catholic faith and traditions, and was active for many years as a lector in St. Adrian parish on the southwest side of Chicago. He also placed a high value on hard work, and served for 35 years on the early shift as a timekeeper in the U.S. Post Office, while simultaneously holding other positions including many years as a bank guard. One of his highest expressions of praise was to say that someone was a hard worker. Jerry greatly enjoyed professional baseball, football, basketball and hockey. His allegiance was primarily to the Chicago White Sox, Bears, Bulls and Blackhawks. But during his final years as a Michigander, he made room for the Tigers and the Lions. Jerry was a warm and generous man who was quick to offer help to others in need. He had a quick wit and a smile that lit up the room. He enjoyed many lifelong friendships from his work and community life in Chicago, and he and Ella made valued new friends at Cedar Creek Senior Apartments over the last ten years. Above all, he valued family; especially his wife Ella, his daughters Linda and Patricia, his sons-in-law James Boyd and Stephen Coye, and his grandchildren Alyssa, Gavin, Olivia and Zoe. A Mass of Christian Burial will be held on Friday, September 6, 2013 at 11:00 am at Immaculate Conception Catholic Church. Military honors will be provided by Cherryland VFW Post #2780. Interment will follow at 3:30pm at Bankers Cemetery in Hoxeyville. Memorial contributions in memory of Jerry may be directed to the Disabled American Veterans. Please visit www.reynolds-jonkhoff.com to share your thoughts and memories with the family.

Jerry Adam Polach, 96, of Traverse City and formerly of Hoxeyville and Chicago, passed away peacefully on September 2, 2013 at Munson Medical Center. Jerry&#8217;s long life was enriched by deep family attachments, most particularly to his... View Obituary & Service Information

The family of Jerry A. Polach created this Life Tributes page to make it easy to share your memories.

Jerry Adam Polach, 96, of Traverse City and formerly of Hoxeyville...