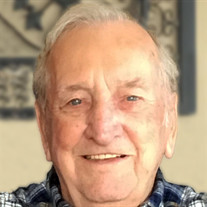 Jerry Richard Umlor, 86, a life-long Traverse City died Friday, September 6, 2019 at Munson Medical Center in Traverse City. Jerry was born on Friday, April 21, 1933 to the late George and Ethel (Welsh) Umlor in Traverse City. He attended school here. In kindergarten, he and his friend Jerry Patterson decided they would run away from school, and did so!. Jerry graduated from Traverse City High School in 1951. A veteran of the Korean Conflict, Jerry served as a member of the U. S. Army. Very proud of the fact that he was a paratrooper, Jerry often said “I jumped out of an airplane 18 times, every time in fright.” He married the former Elaine Anne Domzalski Trombley on June 19, 1994 in Traverse City. Jerry had been employed at Arnold-Tezak before becoming the Assessor for the City of Traverse City. Later he would become the Grand Traverse County Equalization Director. He loved all things out of doors and sports. He enjoyed playing Blooper Ball, bowling, golfing, water and snow skiing, boating, deer hunting and two tracking. He and Elaine also enjoyed spending winters in Orange Beach, Alabama. Survivors include his wife Elaine; his children, Rory (Julie) Umlor of Traverse City; Melanie (Art) Schneider of Cedar, Michelle (Jerry Flaska) Umlor and Denise (Harold) Grant, all of Lake Ann; step-children, David Trombley of Traverse City, Matt (Nicole) Trombley of Brighton; grandchildren, Christina (Ross) Kniffin of Interlochen, Eric (Dawn) Umlor of Traverse City; Colin Schneider of WA, Caitlyn, Allison and Megan Trombley of Brighton, Emily and Elizabeth Trombley of Rapid City, and great grandchildren Dalton (Lizzy) Umlor of Traverse City, Brady Kniffin of Interlochen and Gracie Whaley of Kingsley. Jerry is also survived by his sister Beatrice Zimmerman of Livonia, a brother-in-law and his wife, Stuart and Carol Corpe of Traverse City and many nieces and nephews. Jerry was preceded in death by his first wife Gail Corpe Umlor, step son Daniel Trombley, brother George Umlor, sister, Betty Russell, great grandson Benjamin James Umlor. The family cannot thank Holly and the staff at the Pavilions enough for their care and support of Jerry. And without help from Leslie, Elaine could not have navigated Jerry’s and my journey through the past few years. So grateful. Jerry will now have great seats on the 50 yard line at U of M football games with Jim Franklin. At his request, no formal services will take place. Inurnment will be in the columbarium of Oakwood Cemetery. Memorial contributions in Jerry's name may be directed to a Veteran's organization of your own choosing.

The family of Jerry Richard Umlor created this Life Tributes page to make it easy to share your memories.