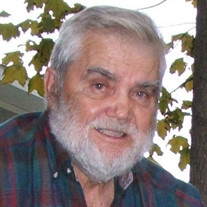 Jerry A. Zachary, "Ol' Zach", of Traverse City, made the list of those who have gone before him on Nov. 3rd, just short of his 92nd birthday. He was born in Whitesville, Montgomery County, Indiana, to Herman "Lucky" and Marie (Higgins) Zachary, who farmed in the rural countryside of the small community of Ladoga. After high school, (Jerry was president of his senior class), older brother Joe stayed with farming while Jerry got a job for a couple years at R.R. Donnelly Printing Company in Crawfordsville IN, starting as a bookbinder. Then 1950 came along and on the advice of his girlfriend's father, Maurice Gross, he joined the Navy. After basic training in South Carolina, he married that girl, Nancy, two days before Christmas, and then shipped out. The Navy stationed them in San Diego where they remained stateside while the Korean War boomed. He learned and practiced his lino-type trade in the harbor, helping with the printing needs aboard ships. Before the end of the war, his boat the USS Dixie was called to duty, but on their way across the pacific, peace was declared, and they had to turn around and come back. Soon thereafter, with an honorable discharge, an acquired trade and a '46 Buick, Jerry and Nancy were attracted to Traverse City where there was a good job opening at the Record Eagle where Jerry remained employed for 35 years. He also "moonlighted” at Watson Printing Co. in T.C. Jerry absolutely loved hunting and fishing which could be why it was so attractive to be way up north. By the time his son Sam and daughter Amy were born in the early sixties, he had made many friends and was privy to all the good fishing, hunting and mushrooming. Soon, family vacations to the farm in Indiana and to see Nancy's folks in Kansas were rivaled by camping trips to the U.P. and Canada. Jerry enjoyed basketball in high school so much that he became a referee and worked high school games in the evenings throughout northern Michigan for many years. Towards the end of his tenure with the Record Eagle, he obtained his captains license and began piloting charter fishing boats out of Leland, Frankfort and Grand Traverse Bay. When he retired from printing, he signed on with Fox Motors and drove vehicles for Ford, picking them up and dropping them off all over Michigan and the U.S. He was part of a coffee club that would meet mornings to discuss whatever was on their minds like reviews of their hunting excursions, fishing tales, car problems and the results of the card table where many of them also sat. In his later years, after the boats had been sold, the cars parked, the hunting rifles put up and them mushrooms harder to find, it was easy to find Jerry in front of his fireplace, surrounded by his trophy racks with a drink in his hand, watching sports on T.V. If you called him on the phone, he answered, "Zach speakin' ", and you knew instantly who you were talkin' to. Jerry's family would like to acknowledge and sincerely thank the many members of the Veterans Administration for their commendable involvement and guidance concerning Jerry's health care and wellbeing. The same appreciation goes out to his caregivers who were many and amazing over the years. There is no way we could have gotten through this without all of you. We'd like to thank you all again and again. Jerry is survived by his son, Sam Zachary, Sam's wife Cheryl, daughter Amy Zachary, and many nieces and nephews. Preceding Jerry in death were; his wife of 68 years, Nancy, her parents, his parents, brother Thomas, brother and sister in law Joseph and Esther Zachary, brother in law and sister in law Johnny and Patricia Goslin. Friends and family are invited to attend Jerry's memorial gathering, on Saturday, November 13, 2021 at the Reynolds-Jonkhoff Funeral Home at 4pm. Visitation will begin at 3pm and a light reception will follow the service. Those considering an expression of sympathy may care to contribute to the Alzheimer's Association and envelopes will be provided at the service. You are welcome to share memories with Jerry's family on his tribute page at www.reynolds-jonkoff.com.

Jerry A. Zachary, "Ol' Zach", of Traverse City, made the list of those who have gone before him on Nov. 3rd, just short of his 92nd birthday. He was born in Whitesville, Montgomery County, Indiana, to Herman "Lucky" and Marie (Higgins) Zachary,... View Obituary & Service Information

The family of Jerry A. Zachary created this Life Tributes page to make it easy to share your memories.