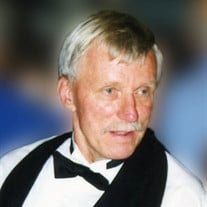 INTERLOCHEN — Jim McLeish, 71, of Interlochen, passed away April 14, 2014, at his home. Jim was born on April 29, 1942, in Stubenville, Ohio, to James Leonard and Mary (Nutter) McLeish. On Sept. 7, 1975, Jim married Deborah Lynn Cherry in Lake Ann. Jim loved the outdoors and the privilege of living on Green Lake. At an early age life brought on the challenge of multiple sclerosis. He courageously accepted losing his strength on the outside and found something of much more value. Jim found the true peace, love and victory that only our Lord, Jesus Christ can give. He loved his family and was able to hold his latest grandchild on her way home from the hospital just hours before he died. It was a true honor for his wife, family and health workers to care for Jim. He always had a thankful heart. Jim’s wish would be that if you see a need fill it in anyway that you can. Jim is survived by his wife, Deb; daughter, Jennifer and Mike Krause Sullivan; and their children, Noah, Kai and Cynthia Krause-Sullivan; daughter, Rebecca and Chris Hummel; and their children, Ethan and Raina; beloved mother, Mary McLeish; sister, Sheri (Harry) Dorman; mother-in-law, Cynthia Monroe; father-in-law, Ed Cherry; children, Scott McLeish and Heather McLeish; and grandson, Troy McLeish. A private memorial will be held at a later date. Please visit www.reynolds-jonkhoff.com to share your thoughts and memories with the family. The family is being cared for by Reynolds Jonkhoff Funeral Home and Cremation Services.

The family of Jim McLeish created this Life Tributes page to make it easy to share your memories.