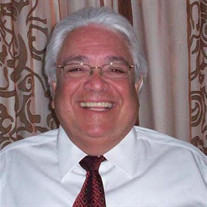 Williamsburg - Jim Papazian, 73, of Williamsburg and formerly of East Lansing died April 4, 2020 at the Munson Hospice House in Traverse City after a short battle with glioblastoma. Jim was born on October 9, 1946 in Highland Park, Michigan to the late Arthur and Bernadette (Kosch) Papazian. Growing up in the Motor City rooted a love for the city of Detroit and Motown music that would last throughout Jim’s lifetime. Jim graduated from Berkley High School in 1964, followed by the University of Michigan in 1968. Some of his fondest memories were made at Michigan where he forged lifelong friendships. Jim was a proud Michigan alumnus and served on various boards including the University of Michigan Alumni Association National Board and the Club Council for the University of Michigan. He also received an MBA from the University of Notre Dame in 1970. On June 21, 1975 Jim married Barbara Lynn Bjork in Traverse City. Jim started his career in Lansing with the Metropolitan Life Insurance Company, and later became the Vice President for Mourer Foster Insurance. He served as President for Financial Technology, Inc. in East Lansing until founding his own business, Markat Benefit Administration, which later became Markat Consulting, in 2009. As a professional, Jim worked hard on behalf his clients and took pride in ensuring their needs were taken care of and looked after. He was active in his community. He served as president of the Greater Lansing Estate Planning Council, Central Michigan Charter Life Underwriters and was a member of the East Lansing Educational Foundation, where as president he helped the foundation’s endowment cross the million-dollar mark. In 2015, Jim and Barb relocated to Traverse City after over 40 years in East Lansing’s Glencairn neighborhood. Above all else, Jim cherished his family. Jim, Barb and their children Mark and Katie shared many family adventures, spending football Saturdays together watching the Wolverines play, boating on Michigan’s lakes, and taking family trips around the U.S. and abroad. Over the last ten years, Jim loved his role as “Poppa” more than anything else, looking forward to many FaceTime conversations and visits with his grandchildren, Jake and Julia. Jim loved to travel, boat and jet ski, enjoy time in the Florida sun, and vacation at the family cottage on Burt Lake. He loved to laugh and could find humor in nearly any situation. Jim is survived by his wife Barbara, son Mark (Angela) of Elmhurst, IL, daughter Katie of New York City; grandchildren Jacob and Julia Papazian of Elmhurst, IL; sister Clare (Jim) Okraszewski of Land'O'Lakes, WI, sister Diane (Peter Golio) Papazian of Los Angeles, CA; sisters-in-law Karen (Peter) Strom of Traverse City and Jean Boquist of Elk Rapids, brother-in-law Bill (Elizabeth) Bjork of Grand Rapids; and many nieces, nephews, family members and friends. Jim was preceded in death by his parents, beloved uncle Harry Papazian, niece Catherine Strom Schmidt, and brother-in-law John Boquist. A private family service will be held at 11am on August 7, 2020 at the Reynolds-Jonkhoff Funeral Home. Friends are invited to watch by way of Webcast at WWW.RJFH.TV at that time. Please share memories and sign Jim’s online guestbook at www.reynolds-jonkhoff.com. Memorial contributions in Jim's honor may be directed to the ChadTough Foundation, PO Box 907, Saline, MI 48176 www.ChadTough.org, or to the Father Fred Foundation, 826 Hastings, St. Traverse City, MI 49684 www.fatherfred.org/donate.

Williamsburg - Jim Papazian, 73, of Williamsburg and formerly of East Lansing died April 4, 2020 at the Munson Hospice House in Traverse City after a short battle with glioblastoma. Jim was born on October 9, 1946 in Highland Park, Michigan... View Obituary & Service Information

The family of Jim Papazian created this Life Tributes page to make it easy to share your memories.