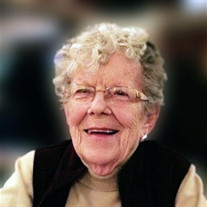 Joan Moore, 91, of Traverse City died October 16, 2019 in Traverse City. Joan came into this world on July 28, 1928 in Dunkirk, Indiana. Her mother traveled from Hastings, Michigan to be with family during the birth. Joan grew up in Hastings with an older brother and a younger sister. Helen Joan was her given name, but at the age of six, she told her teacher that she would no longer use the name Helen. She spent many summers during her childhood with her grandparents on their Indiana farm. After graduating high school, she attended Davenport Business College in Grand Rapids. While working at a local restaurant she met her future husband and together they had two children. Joan and her husband purchased Fairman Drugstore, renaming it Turner Pharmacy in Big Rapids which they owned for 13 years. In the mid 1980's, Joan and her husband divorced and she moved north for the next chapter of her life, residing in Suttons Bay and Traverse City. Joan volunteered at the former Beaumont Building, trained as a phlebotomist and ultimately worked various positions with the Munson Medical Center Labs. Upon retirement from Munson, Joan returned to retail and worked several more years at Hudson’s/Macy's. When fully retired, she enjoyed her hobbies which included bird-watching, rock hunting, gardening, Tai Chi, taking care of her pets and spending time with friends and family. She had a keen sense of humor and loved to laugh. Joan was predeceased by her parents, Robert Brooks Moore and Tean Evelyn Faulkner; her older brother Robert Gordon Moore and his wife Rose; brother-in-law Edward "Bud" Freeland; nephews Alan Moore and David Freeland; brother-in-law Postal Turner; and beloved dog, Mary Ellen. Joan is survived by her daughter, Nancy Turner and her husband, Ed Andres; son James J. Turner and his wife Denise Sloan; grandchildren Erin Sloan Turner and Patrick Sloan Turner; sister Jean Freeland and her husband David Nelson; nephews Rick (Julie) Moore, Ed (Gloria) Freeland, Doug (Amy) Freeland and niece Stephanie Moore (Larry) Sheler. Joan "Aunt Jo" had a special relationship with her sister's great granddaughters, Sophie and Cassie, and their parents Lauren and Jeff Magnatta. Their visits brought joy and support during Joan's final days. Memorial donations may be made to the Cherryland Humane Society, Grace Episcopal Church Food Pantry or to the Jubilee House providing support for persons who are homeless. A celebration of Joan's life will be held at Grace Episcopal Church in Traverse City on Saturday, October 26, 2019 at 3:00 pm with visitation beginning one hour prior. Please visit www.reynolds-jonkhoff.com to share your memories and condolences with the family.

Joan Moore, 91, of Traverse City died October 16, 2019 in Traverse City. Joan came into this world on July 28, 1928 in Dunkirk, Indiana. Her mother traveled from Hastings, Michigan to be with family during the birth. Joan grew up in Hastings... View Obituary & Service Information

The family of Joan Moore created this Life Tributes page to make it easy to share your memories.