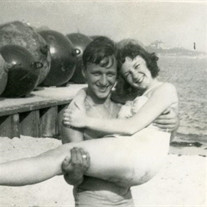 Traverse City- Joan Ona Nachazel, of Traverse City, took the journey home to be with her Lord God, Jesus Christ, early Monday morning, November 9, 2015. The History of Our Nations Northeast Coast reveals to us that many treasures are to be found in and around Cape Cod. My father, Frank J Nachazel found out for himself when he became stationed in the Coast Guard at Woods Hole Oceanographic on Cape Cod and met the most beautiful “Irish Princess” and “rare gem”; Joan Ona Taylor of Taunton, Massachusetts. They met and fell immediately in Love. It was a love that would flourish and endure. That was 1951. Our mother, Mrs. Joan O. Nachazel, “took the journey”, early Monday morning November 9th. We agree that her heart was broken when our Father left for Heaven 2 years ago without taking her along on the trip, as was his normal habit. They had been by each other’s side,” in sickness and in health”, “for richer or for poorer” for 63 years. Our Mother and Father were in point of fact the single wealthiest couple in Northern Michigan. We, our family, loved them and cherished them all the days of our lives. Anyone that ever came to know them instantly loved them as well. There is no greater wealth than love. Mom raised 5 boys, as Dad’s career caused him to travel from promotion to promotion, opportunity to opportunity, with Broadcasting Corporations dominant in the Midwest. While never shirking her duties to her “munchkins” she somehow managed to pack and UN pack the entire household 26 times between a career encompassing Michigan, Ohio and Indiana. Mom herself was an outstanding secretary and bookkeeper, employed in numerous Radio Stations and eventually filling the role of office administrative manager for Child and Family Services here in Traverse City. Mom was beautiful and graceful and always reached out her hands to help the less fortunate. Mom and Dad were avid supporters of the National Cherry Festival devoting huge sums of energy as volunteers and annually attracting large numbers of additional volunteers to our city’s famous party .They both performed this work for over 20 years. Mom loved to join the “boys” and her husband camping and fishing and sailing as we were a family thrilled to be outdoors, up north, in the Nachazel ancestral home setting. It was on Good Harbor Bay, where, my father’s grandfather, John Nachazel, first greeted and welcomed my Mother to the early settlement shoreline where he maintained the family cabin on Lake Michigan. He offered them both a toast of fine whiskey, my mother recalled. It would be her first and last time she ever tasted the elixir. It was here, on this shore where John’s grandfather Jan, first set foot in Michigan, after emigrating from Czechoslovakia to find a ship in Chicago to take him north; to Gods’ Country. Over the course of many years Mom and Dad were faithfully devoted to Immaculate Conception Parish in Traverse City and held their own in the choir celebrating the Sundays and Christian Seasons of Joy with their passionate voices together. It was in November, on their Honeymoon, That our young Father brought our equally young mother here to the “North Woods” of Michigan to meet his Mom and Dad and siblings in East Jordan, and take this New England girl out for a taste of Family Deer Hunting. With that in mind, and knowing that Mom knew in her longing heart that their November 14th Anniversary was fast approaching again…that we surmise Mom quietly and gently surrendered herself of this life, and we are sure, has found Our Father in the next one. Our Mother completed a poetic circle from November 1951 to November 2015. The Northwest Coastline of Michigan; is this fall, missing a vast and beautiful treasure of perfect selfless love embodied in the form of Mrs. Joan Ona Nachazel. A Love, that was once here for the benefit of many for many. Mom was 84 years young. We will all miss her. We will see her again. A Memorial Mass Celebration will be held at Immaculate Conception Parish in Traverse City on the Feast Day of Our Lady of Guadalupe, conducted to comfort us, the living, on Saturday, Dec. 12, 2015 at 11am. Friends and family are invited to attend a gathering reception at 10 a.m. Mass will be at 11 a.m. with a luncheon following in the family center. This happens to be the same precious Feast Day our father’s funeral Mass was conducted upon just two years ago. Mom is survived by her five sons, her five grand daughters, 8 great grand daughters and one great grandson. Please feel free to make donations to Child and Family Services if Traverse City in lieu of flowers.

Traverse City- Joan Ona Nachazel, of Traverse City, took the journey home to be with her Lord God, Jesus Christ, early Monday morning, November 9, 2015. The History of Our Nations Northeast Coast reveals to us that many treasures are to... View Obituary & Service Information

The family of Joan Ona Nachazel created this Life Tributes page to make it easy to share your memories.