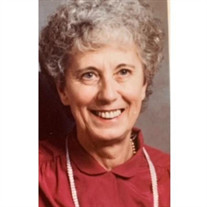 TRAVERSE CITY – Joan Viola Walters, age 90, of Traverse City passed away Wednesday, April 14, 2021 at Munson Medical Center with her sons by her side. Joan lived an extraordinary life. She was born prematurely on February 23, 1931 to Oscar and Esther (Johnson) Sundeen in Traverse City. Sadly, Esther passed away shortly after Joan’s birth. As a cherry farmer, Oscar was unable to care for a premature infant and she was sent to reside with relatives in Chicago. Being premature, she was a struggling infant. It was determined to send her back to Traverse City. At Munson, she still struggled to thrive. A new Mother heard of this infant and offered to become her wet nurse. Every day, that Mom walked to and from the Hospital to deliver her milk to this precious baby. As Joan gained strength, a local Physician reached out to a family he knew wanted a daughter. Joan was then adopted by Henry and Nora Cox, of Traverse City. Throughout the years, Joan visited her birth Father and Sister, Elsie in the summer months. Joan grew up in Traverse City and graduated from Traverse City High School. Quite an adventurer, Joan attended courses in nursing and then ventured to Colorado with friends. She worked and enjoyed skiing and getting into shenanigans with her friends. She traveled back to visit home in the summer months. In one of these summers, she met her future husband, John Walters. She returned to Traverse City and they were married October 8, 1960 at St. Francis Church. She remained a member of St. Francis Catholic Church and taught faithful lessons to her family in how she lived her life. Joan was a busy and dedicated wife and mother. She raised 4 children. She was sure to be seen cheering for each of them as they participated in sports and activities. As her children grew into adulthood, her pride for each of them was evident. That love and pride grew with her family as she became a Grandmother to Johnathan, Lance, Alayna, Emily, Ben, Abbie, Heidi, Brent, Maia and Owen. Joan held a passion for an active and healthy life. She could be found cross country skiing, swimming, walking, biking and roller blading! She was an avid Pistons fan who rarely missed a game and made sure we all knew when they were playing! Joan was recognized as an outstanding senior participant in the VASA. She was a volunteer for the United Way, Music House, VASA, Women’s Ski Tour, Catholic Daughters and Meals on Wheels. Joan enjoyed traveling, knitting, swim groups, craft groups and enjoyed her treasured friends whom she met in all her activities. Joan was an active member of the TC Senior Center where, at an event, she overheard a woman telling her story about a premature infant that she had been a wet nurse for after her son was born. Joan was shocked and asked the woman if she knew the name of that baby. It was then that she discovered this woman, Blossom, was the young mother who was her wet nurse that saved her life. They remained close throughout the remainder of Blossom’s life. Finding Blossom was one of the greatest miracles of Joan’s life. Joan held a quiet presence – however; her enduring strength was immeasurable. She will forever be missed by her children; Jim (Kim) Walters, Bob (Terra) Walters, Son in Law, Rick Anderson and her 10 treasured grandchildren, special nephew, David Cox and many loved nieces and nephews. She was proceeded in death by her beloved husband, John; Son, Ron; Daughter, Barbara; her parents: Henry and Nora Cox; Oscar and Esther Sundeen; Siblings; Jack (Marian) Cox, Mackenzie (Victoria) Cox, Elsie Edmondson. A visitation for Joan will take place from 4:00 – 7:00 PM on Tuesday, April 20, 2021 at St. Francis Catholic Church with a Rosary recitation at 7:00 PM. A funeral mass will be held, Wednesday, April 21, 2021 at 11am with visitation 1 hour prior at St. Francis Catholic Church. Father Don Geyman will preside. A live stream of Joan’s service for those who are unable to physically attend can be viewed at: www.sfparish.org. Joan’s Christian burial will take place at Oakwood Catholic Cemetery, April 22, 2021 at 11:00 AM. Joan asks that memorial contributions in her memory be directed to; American Diabetes Association, P.O. Box 7023 Merrifield, VA 22116-7023. Please share a memory with Joan’s family by visiting her tribute page at www.reynolds-jonkhoff.com. The Reynolds-Jonkhoff Funeral Home and Cremation Services is serving the family.

TRAVERSE CITY &#8211; Joan Viola Walters, age 90, of Traverse City passed away Wednesday, April 14, 2021 at Munson Medical Center with her sons by her side. Joan lived an extraordinary life. She was born prematurely on February 23, 1931 to... View Obituary & Service Information

The family of Joan Viola Walters created this Life Tributes page to make it easy to share your memories.