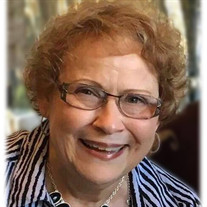 JoAnn Arlene Medler, a resident of Northport for the past 14 years, passed away July 2, 2018, surrounded by her loving family. JoAnn was born as the 51st resident of Ravanna, MO on Nov. 27, 1944 to Dr. Richard A. and E. Joyce Smith. At age 14 she moved to Lansing, MI, and graduated from Everett High School. JoAnn worked her way through Michigan State University as a runway model for sample bridal gowns and also ran a bridal shop. She earned her BA and MA in Literature and History and accepted her first teaching assignment at Walter French Junior High School in Lansing, MI in 1966. Two years later on Feb. 10, she met her husband, Jerry, the love of her life, during a singles ski weekend he had organized at Mt. Holiday of Traverse City. They were married 12 weeks later on May 10, 1968 in Lansing and recently celebrated their 50th wedding anniversary with family and friends. While teaching at Walter French JoAnn worked with MSU professors to create the first Humanities course in the state of MI for secondary students, realizing that history needed to be taught in context from the period, not in isolated dates. In 1981, JoAnn was hired by the Traverse City school system, where she taught at the junior high level and then at Traverse City Central High School until her retirement in 2004. During this time she wrote the Performing Arts Courses and the AP European History course for both schools and implemented them into the curriculum. Throughout her teaching career she taught multiple curriculums surrounding the subjects of literature and history, including advanced placement and honors courses, which were her passion. Each and every class she taught was embraced with a vigor that captivated, engaged and motivated her students. JoAnn enhanced and interlaced her lessons with personal stories, a sense of humor and outlandish, interesting facts. She challenged her students, accepted them for who they were and fostered a sense of trust and respect. Many of her students would take as many of her classes as possible, because they enjoyed her so. Not only did she touch the lives of her students in positive ways, they touched hers as well. JoAnn loved teaching and traveling with her students to Europe and places they had studied. Her daily goals were to show patience and compassion and to offer a kind word or a small act of kindness. She wanted to open students’ eyes to a wider world, a world beyond Traverse City, beyond Michigan and beyond the U.S.A. She seemed to have a sense of exactly what a certain teen needed. She literally touched thousands of young lives through her gift of teaching. In retirement JoAnn’s greatest joy became time spent with and caring for her grandchildren. She found pleasure with each and every one, understanding and fostering their individual interests. JoAnn continued her zest for travel, sharing opportunities with her daughters to visit friends across the country. JoAnn is survived by her loving husband of 50 years, Gerald Ernest. Unconditional love and acceptance was always felt by her surviving children: Kimberly Ann Phelps (Darrell) of Harbor Springs, Matthew Evan Medler (Katie Tavener) of Traverse City, Kristi Jo Medler of Northport, and Kathryn Marie Sahs (Aaron) of Northport. JoAnn fiercely loved her grandchildren and was so proud of all their accomplishments and individual abilities: Andrew of Harbor Springs, Maddison, Taven and Rowen of Traverse City, Olivia and Bailie of Northport, and Wyatt, Conner and Riley of Northport. She is also survived by her sisters, Allene Henderson and Sandra (Calvin) Tompkins of Eaton Rapids, brother-in-law, John (Susan) Medler of Grayling, a nephew, Jason (Jamie) Medler of Rodney, a niece, Sarah of Grayling, and two great nephews, William and Evan of Rodney. Preceding her in death were: a nephew, Jared Medler of Grayling, an infant granddaughter, Chloe Arlene, her parents, Dr. Richard A. and E. Joyce Smith, a favorite grandmother, Edna Weaver of Princeton, MO, and her brother-in-law, Edward Henderson of Eaton Rapids. Visitation will take place from 4 until 5:30 p.m. Sunday, July 8 at The Reynolds-Jonkhoff Funeral Home. A celebration of JoAnn's life will begin at 11 a.m. Monday, July 9 at First Congregational Church with visitation one hour prior to the celebration. The Rev. Dr. Gary Hogue will officiate. Interment will take place at Grand Traverse Memorial Gardens in a private family service. In lieu of flowers donations may be sent to Child and Family Services (3785 Veterans Dr., Traverse City 49684 or online at www.cfsnwmi.org) for children who have been victims of domestic violence, Gideon’s International Bibles, or the charity of one’s choice. Please share a memory with JoAnn’s family by visiting her tribute page found at www.reynolds-jonkhoff.com. The Reynolds-Jonkhoff Funeral Home is serving the family.

JoAnn Arlene Medler, a resident of Northport for the past 14 years, passed away July 2, 2018, surrounded by her loving family. JoAnn was born as the 51st resident of Ravanna, MO on Nov. 27, 1944 to Dr. Richard A. and E. Joyce Smith. At age... View Obituary & Service Information

The family of JoAnn Arlene Medler created this Life Tributes page to make it easy to share your memories.

JoAnn Arlene Medler, a resident of Northport for the past 14...