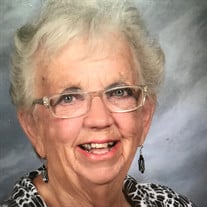 Joanne Sluyter Parshall Kline December 25, 2019 The sun came out on Christmas day shortly after Joanne Kline’s spirit left her body. She was born July 24, 1929, to Rev. John and Juanita (Tubbs) Sluyter, and spent her early years in Michigan’s U.P. before living in Elberta, the place that always held her heart. Joanne graduated Salutatorian of her Albion High School class and Phi Beta Kappa from Albion College. Years later she attended Garrett Theological Seminary in Evanston, IL. During the 1980s, Joanne was pastor of Williamsburg United Methodist Church. She also served as Associate Pastor at Central United Methodist in Traverse City. She will long be remembered for her grounded, insightful sermons, always illustrated with real-life stories. Joanne celebrated others by sending over 1000 birthday cards per year, each with a personalized inspirational message written in beautiful penmanship. She encouraged people to celebrate themselves for two weeks. She thrived on fun and silliness. In the 1970s, her Silver Lake house was famous at Halloween for having a “food truck” complete with menu, sweets, and savories. There she dressed as a witch, played spooky music, and took orders in a raspy voice. Being invited to her house on a Sunday night was the best, and family friends jockeyed for that opportunity, because during the Walt Disney Hour, she’d put out a giant tin of candy and everyone got sugared up. Joanne loved dogs and babies. When it became clear that her five children were enough, Joanne took in foster babies, nurturing them until their adoptions became finalized. Holding a baby was the only thing that could get her out of bed early in the morning. She adored her husband, Mayjor, and thrived on their love. His death in 1997 was the great tragedy of her life. Joanne loved daffodils and yellow cars. She loved chocolate and Big Boy coffee and the NMC BBQ. She loved Dixieland Jazz and wanted it played at her memorial service. She loved taking photographs and made her own greeting cards. She loved campfires, beaches, and floating in water. Joanne loved football and never shied from being the loudest voice cheering from the stands. One summer day in her 70s, Joanne realized she’d never had a convertible. That day she bought one. Well into her 80s, she was the silver-haired lady seen around Traverse City driving a Miata and later a bright blue Sebring. When the August 2, 2015 storm-of-the-century hit, she was driving to Elk Rapids with the top down, and she kept going, finally arriving for dinner soaked. When she opened her car door, water poured out. She didn’t care. In her 1990 Christmas letter to her children she wrote, “I am grateful for the great gift each of you are to me, for the opportunities I’ve had to love you, to have some input into molding the very special persons you are today, for the patience you had with my mistakes, for the love you have and that you continue to return to me. I am consumed with gratitude! I wish for each of you the satisfaction that comes from the knowledge that you have “really lived” rather than that you simply spent a certain number of years on this earth or that you accumulated a certain amount of material wealth or education or “success” or attractiveness or personality. As I grow older, I think that God cares very little about these kinds of achievements.” Joanne is survived by her children David Parshall, Nancy Parshall (David Bedford), Douglas Parshall (Paula), Daniel Parshall, and Susan Hooper (Kevin). She is also survived by her friend and first husband, James Parshall, D.O. and his wife Carole; four grandchildren (Bryan, Corey, Dylan, Emily); ten great-grandchildren; stepson Morris Kline (Sindy); stepdaughter Lana Kline; numerous nieces and nephews; and many, many friends. Joanne was pre-deceased by her husband, Mayjor Kline, her parents, four siblings, and numerous beloved dogs and cats. The family is indebted to Orchard Creek Assisted Living and Hospice of Michigan for their loving care in her final months. Joanne was a beautiful gift. A celebration of life will take place at noon on Saturday, January 4, 2020, at Central United Methodist Church in Traverse City. All are welcome and she wouldn’t want you to wear black. In lieu of flowers, please send donations to your favorite humane society or animal rescue.

The family of Joanne S. Parshall Kline created this Life Tributes page to make it easy to share your memories.