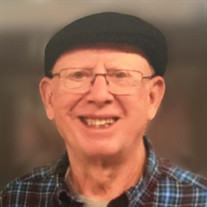 In the late hours of February 21, 2021, John Bretz “Andy” Anderson passed on from this world while in the loving company of his family. He is survived by his wife Joy Jimo-Lang, one sister, three sons, three daughters, three grandchildren and a great grandchild. John was born in Manistique, Michigan in 1942 to Carl and Faye (Bretz) Anderson. He was raised with his older sister Sandy. They both went to Manistique High School and John graduated in 1960. John was an avid “Emerald” throughout his life and loved class reunions. John pursued his higher education at the University of Chicago and completed his degree at Western Michigan University. There he met and married his first wife, Sally Davis. Together they raised and loved their three sons: Eric, Peter and Chris. John enjoyed fishing, gardening, raising chickens and DIY projects. He shared these past times with his sons as well as many stories of growing up in the U.P. “Did I ever tell you about ‘Moon’?” was a common phrase in the Anderson house. After the ending of his first marriage, John met, courted and married his second wife, Margaret Standish. With this union he gained a teen-age daughter, Katherine Standish. This chapter in his life grew and thrived for 12 years until the unexpected passing of Margaret. Being widowed and recently retired John began volunteering for Habitat for Humanity. There he met and reconnected with an old schoolmate (They’d known each other since fourth grade), Joy Jimo-Lang. He and Joy spent more and more time together and were eventually married in 2006. His family once again grew. He gained two daughters: Kim (John Staudacher), Jane Lang and a granddaughter Katie. John and Joy were very active volunteering, traveling, and staying connected to family and friends. John took great enjoyment in coordinating Project Christmas Child in the Leland United Methodist Church. He also assisted in taking groups to Manistique to volunteer with Habitat for Humanity. He was very proud of his Yooper heritage and loved sharing the value of giving with others. He also wrote two books about growing up in the U.P. Prior to retirement, John worked primarily as a Business Manager/Director for Allegan County Mental Health, Calhoun County Community Action Agency, and the Lakeview Medical Center. He also worked as a successful Controller/Salesman for Xerox. His favorite job was with the Health Department of the Pokagon Band of Potowatomi Indians. A celebration of his life with friends and family will be held in Summer 2021. Anyone wishing to make a contribution in his name might consider, leelanauchristianneighbors.org or hiawathalandhabitat.com. John now travels the trail to where Spirits dwell. He will be greeted be those who have gone before him. The rest of us will miss him greatly.

In the late hours of February 21, 2021, John Bretz &#8220;Andy&#8221; Anderson passed on from this world while in the loving company of his family. He is survived by his wife Joy Jimo-Lang, one sister, three sons, three daughters, three grandchildren... View Obituary & Service Information

The family of John Bretz Anderson created this Life Tributes page to make it easy to share your memories.