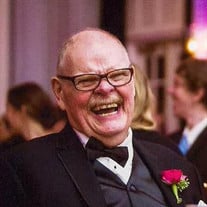 John Alexander Boquist, of Elk Rapids, was born March 22, 1947 in Traverse City, Michigan to Albert Lewis and Sylvia Tellervo (née Keto) Boquist and died August 28, 2019 in Suttons Bay, Michigan. A graduate of Traverse City High School, John’s wit and humor were exceeded only by his intellect. He received a degree in industrial engineering from General Motors Institute (now Kettering University) in Flint in 1969, and soon after married Jean (née Bjork), also of Traverse City. The two moved to West Lafayette, Indiana where John received a master’s degree in industrial administration and then a PhD in finance from the Krannert School of Management at Purdue University. He joined the faculty of the Kelley School of Business at Indiana University in 1973 and retired in 2011 as the Edward E. Edwards Professor of Finance. John spent his entire career at Indiana University in Bloomington, Indiana, and was among its most devoted and beloved educators. He received innumerable awards over his 37-year career; of note, he was recognized with the all-university Herman F. Lieber Award for outstanding teaching in 1979, by Business Week in 1994 as one of “12 Masters of the Classroom”, and by the university that same year with the Max Barney Executive Education Teaching Award. His career spanned nations, generations, and settings, and he was lauded for his work with audiences from the Portland Cement Association and General Motors, to managers and faculty seeking to transition Eastern Europe from a planned to a market economy, to MBA and PhD students at IU. He was also an accomplished researcher, publishing throughout his career and co-authoring The Value Sphere: The Corporate Executives’ Handbook for Creating and Retaining Shareholder Wealth, which is now in its fourth edition. In 2008, a former student’s generous gift established the Meyer-Boquist Chair, honoring his impact on his students. His former colleagues continue to enjoy teaching his cases in class. Perhaps John’s most valued achievement, however, was his fifty-year marriage to his beloved wife, Jean. The two embarked on their early days of marriage in cramped married student housing at Purdue, but ultimately were able to travel the world together and see four continents at each other’s side. Nothing, however, was a greater adventure than raising two sons together, Alexander and John Bjorn, and the family even spent two year-long sabbaticals in France where John was a visiting faculty member at INSEAD. They instilled in their sons their shared love of learning, commitment to teaching, devotion to family, and joy in time together. They shared and modeled the ability to find humor in almost any situation, including IU’s often bedraggled football team, and eventually the amyloidosis that weakened John’s heart. As travel became a challenge, they took joy in the natural beauty of Grand Traverse Bay from their home in Elk Rapids, and the warmth of the Arizona desert from the home that they purchased in Phoenix. In his later years, no one brought a smile to John’s face more quickly than his granddaughter Annika and his grandson Mattias. John is preceded in death by his father, Albert, his mother Sylvia, his niece Catherine Strom Schmidt, and his brother-in-law Stanley McMillen. He is survived by his wife Jean (née Bjork), his son Alexander, daughter-in-law Diane (Reis), granddaughter Annika, grandson Mattias, son John Bjorn, daughter-in-law Diane (née Bychowski), as well as his sister Margot (McMillen). He will also be missed by his sisters-in-law and their spouses, Karen (née Bjork) Strom and Peter Strom of Traverse City, and Barbara (née Bjork) Papazian, and Jim Papazian of Williamsburg, and brother-in-law William Bjork and his wife Elizabeth (née Williams) of Grand Rapids, and many nieces and nephews and their families. A memorial service for friends and family is being planned for Sunday, October 20, 2019, 12:30 PM at Hagerty Center,715 E. Front St., Traverse City, MI 49686 with visitation beginning at 12 noon. The Rev. Rosemary Hagen, D.Min. will officiate. A light luncheon will be served following the service. An additional gathering will be held Nov. 10, 2019 from 1:00 PM until 4:00 PM at The University Club at Indiana Memorial Union, 900 E. 7th St., #150 in Bloomington, Indiana 46405. Those wishing to send a memorial are asked to consider the Boquist-Meyer Fund at the Indiana University Kelley School of Business, 1275 E. 10th St., Suite CG3080, Bloomington, IN 47405 or to the Salvation Army, P. O. Box 5228, Traverse City, MI 49686. Memories of John, as well as thoughts for his family, may be shared by visiting his online guest book at www.reynolds-jonkhoff.com. The family is being cared for by Reynolds-Jonkhoff Funeral Home and Cremation Services.

The family of John Alexander Boquist PhD created this Life Tributes page to make it easy to share your memories.