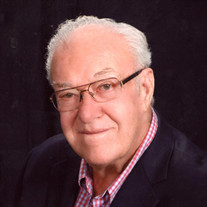 John “Jack” Brief, was born and raised in Traverse City, and passed away March 12, 2021. He was 92 years young. Born July 7, 1928, Jack was raised by Thomas and Hazel (Russell) Brief on 2nd Street downtown. He was named after his uncle, Anthony Brief, later to be known as TC's infamous ballplayer, Bundy Brief. As a youngster, he loved the roller rink in downtown TC and delivered the Record Eagle in his Slabtown neighborhood. He attended Central Grade School and graduated with the class of 1947 at Traverse City High School. Jack then went on to honorably serve in the U.S. Coast Guard and was proud of his service in Cape Blanco, Oregon. After completing his time with the Coast Guard, he used the skill sets he learned while enlisted and was employed by the State Hospital for 36 years. His entry position with the hospital was as a cook, and he made his way up the ranks to Supervisor of Domestic Service, eventually retiring in 1981. Jack, a longtime member of St. Francis Catholic Church, served as an original Eucharistic Minister and an usher for many years. In addition to being a faithful member of St. Francis, his memberships included the Veterans of Foreign Wars Auxiliary, St. Francis Men’s Auxiliary, State Employee Retirees Association (SERA), and Eagles No. 383. Jack was a founding member of the Governmental Credit Union, which is now 4front Credit Union. He was a member of the Board of Directors of Members Credit Union for 18 years and served as President for three terms. Jack and his wife Betty (Gallagher) were married at St. Francis on September 13, 1951, and would have celebrated their 70th wedding anniversary later this year. Together, Jack and Betty provided countless Swiss steak dinners as fundraisers for St. Francis Church and GTACS. In retirement they enjoyed many adventures, and wintered in Wauchula, FL for over 35 years while enjoying Tiger’s baseball, the circus at Sarasota, and flea markets. Time shares were used for many travel opportunities, and they enjoyed numerous cruises. In Jack’s free time, he enjoyed golf, gardening, lawn work and sports. Jack leaves behind his wife Betty, his daughter Cynthia (Bill) Tomlinson, son John (Tammy) Brief II, three grandsons; Andrew (Lisa), Jacob (Amanda) and Matthew. He also leaves behind two great grandchildren; Linnaea and Valla as well as many nieces, nephews, cousins and in-laws. He was preceded in death by his parents, his sister Joella (Victor) Poetner, brothers; Donald (Margery), Thomas (Mary) and Gilford (Agnes). The family would like to thank the staff at the Willow Cottage at the Pavilions where Jack had resided due to dementia. Visitation will take place Sunday June 13, 2020 from 5-7pm with a Rosary being prayed at 7:00pm at the Reynolds Jonkhoff Funeral Home. A Funeral Mass will take place Monday June 14, 2021 at 11:00am at St. Francis Catholic Church. Jack's final resting place will be Grand Traverse Memorial Gardens. Those wishing an expression of sympathy may choose GTACS in Jack's honor. Jack and his family are being cared for by the Reynolds Jonkhoff Funeral Home.

The family of John "Jack" Brief created this Life Tributes page to make it easy to share your memories.

John “Jack” Brief, was born and raised in Traverse City, and...