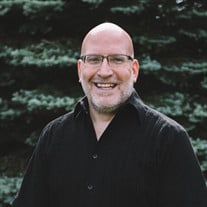 Pastor John J. Clark, 52, of Traverse City, stepped into the presence of his Lord and Savior, Monday, December 9, 2019. Born on Monday, May 15, 1967 in Traverse City, Pastor John was the son of John and Phyllis (Lavigne) Clark. He graduated from Traverse City Central High School and then earned his bachelor’s degree from United Wesleyan College. Pastor John was a true servant of God, called to be a Pastor and minister to his community. He was the founding pastor of West Side Community Church, after having served in other congregations previously. John's passion was serving the Lord. He really enjoyed being in the out of doors, either here or in Canada as well as hunting, boating and fishing. He also was a true craftsman, spending time working on projects, alone or with friends. His greatest love, however, was his family. Each family member was his priority and his love for each of them was more than evident. Surviving is his wife Michele (Knapp), whom he married on March 14, 1987 in Wellsville, NY; children, Andrew (Nichole) Clark, Jerad Clark and his fiancée Amanda VanOordt, all of Traverse City, Abigail (Zachary) Benton of Grand Rapids and Jon-Michael Clark of Traverse City. Two grandchildren are expected in the spring. Pastor John is also survived by his sister Debra Clark and his brother Gary (Keri) Clark and their two children, Ryan and Justin, all of Traverse City. Pastor John was preceded in death by his parents and his brother Mark. Visitation will take place Thursday, Dec. 12 from 6 until 8 p.m. at West Side Community Church, 4975 E. Traverse Hwy., Traverse City, 49674. The service celebrating Pastor John's life will begin at 11 a.m. Friday, also at the church with visitation one hour prior to the service. Memorial contributions may be directed to the Clark family, c/o West Side Community Church

Pastor John J. Clark, 52, of Traverse City, stepped into the presence of his Lord and Savior, Monday, December 9, 2019. Born on Monday, May 15, 1967 in Traverse City, Pastor John was the son of John and Phyllis (Lavigne) Clark. He graduated... View Obituary & Service Information

The family of Pastor John J. Clark created this Life Tributes page to make it easy to share your memories.