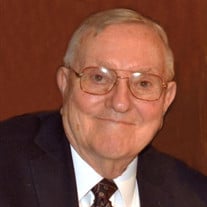 Rapid City - John Leo "Jack" Click, 85, of Rapid City passed away July 1, 2016 at Munson Medical Center in Traverse City. Although his passing was unexpected, he left this world peacefully with family members by his side. John was born on April 27, 1931 in Detroit to the late Harvey William and Carmel Rose (Doran) Click. John graduated from St. Rita's High School in Detroit. He served in the United States Air Force and was honorably discharged in 1952. He then found his calling as a Police Officer where he was honored to serve the people of Detroit. While working as a police officer, John met his future wife, Mary Ann Kaatz. They married on February 23, 1957. Together they raised four children in Detroit and later, in Anchorville, Michigan. John was the true definition of a loving, caring and devoted husband and father. He was always there for support, guidance and help to those in need. John retired from the Detroit Police Department after 25 years of service as a Detective Sergeant in the Homicide Bureau in 1977. He then became the Security Supervisor for the Ford Motor Company for an additional ten years. Following his second retirement, John and Mary Ann moved to a summer home on the Rapid River in Rapid City, Michigan and spent their winters in Tucson, Arizona. In his spare time, John enjoyed travelling and had a life-long interest on the history of World War II. With Mary Ann and his children, he visited all 50 states and many historical sites of great personal significance throughout Europe and Asia. John was, in its truest sense, a family man. His family already misses him for his quick wit, unfailing love, honesty, strength of character, constant support and protection, and his many remarkable life sayings or "Jack-isms" which the family will always cherish in his memory. John is survived by his wife of 59 years, Mary Ann, children Thomas Click, Theresa (Trevor) Cusworth, Patricia Janes, and William (Kimberly) Click; nine grandchildren, Dana and Jenna Click, Stephanie, Jennifer, Matthew and John Cusworth, Katharine, Lauren and John Gregory Janes, and many other family members and friends. John's family will celebrate his life privately at a later date. In memory of John, memorial contributions may be directed to the John and Mary (Kaatz) Click Endowed Scholarship Award at Central Michigan University at www.giving.cmich.edu. The family is being cared for by Reynolds Jonkhoff Funeral Home and Cremation Services.

Rapid City - John Leo "Jack" Click, 85, of Rapid City passed away July 1, 2016 at Munson Medical Center in Traverse City. Although his passing was unexpected, he left this world peacefully with family members by his side. John was born on... View Obituary & Service Information

The family of John Leo Click created this Life Tributes page to make it easy to share your memories.