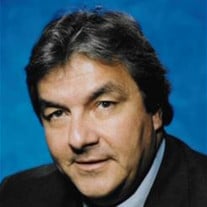 John Dennis Concannon, 71, of Traverse City passed away Monday, November 4, 2019 at Munson Medical Center with his loving wife at his side. John was born on April 28, 1948 in Hamtramck, Michigan to the late Patrick and Mabel (Fisher) Concannon. Honorably, John served our Country in the United States Army. Following his return home from the service he went on to earn his bachelor’s degree and master’s degree in Education from the University of Michigan and remained a lifelong Wolverines fan. He worked in Admissions Counseling at the U of M before moving to Mt. Pleasant to work in the Education Department for the Saginaw Chippewas. Eventually, he would move up to Traverse City and open an art gallery featuring Native American art in Acme. He then worked for the Grand Traverse Band of Ottawa and Chippewa Indians as Youth and Education Director. John ran for Tribal Council, won and enjoyed nine dedicated years of service to the GT Band. He ended his working years as a host at the casino where his advice on public relations was valued and his superb customer relations talents were valued by many guests. During his time working for the GT Band he met Mary Chriscinske. In 2002 the two were united in marriage at the Green Valley Ranch in Las Vegas. Together they enjoyed traveling, watching sunsets and each other’s company. John loved sports both watching and playing. He loved to golf, starting out as a caddie in his youth, and played most of the courses in Michigan with his many golfing buddies. Fondly, John will be remembered for his big heart, ability to easily talk to and connect with anyone, and his genuine smile. He was a wonderful husband, father, grandfather and friend that will be missed by all who loved him. Surviving John is his wife Mary; children, Kyle (Kendra) Concannon, Lisa (Ben) Rader, Molly Concannon; step-children, Katie (Carl) Williams, Sara (Joe) Charlevoix; Grandchildren, Ryder, Kyla, Leena, Emerson, Lynley, Reese, Navy, Grover, Ava, Kent; a sister Rita Concannon and many other family members and friends. John is preceded in death by his parents and siblings, Eileen and James. Private family services will take place in the spring in his hometown of Petoskey. In lieu of flowers memorial contributions may be directed to the American Heart Association or St. Jude Children’s Hospital. Kindly share thoughts and memories with John’s family at www.reynolds-jonkhoff.com. The family is being cared for by the Reynolds-Jonkhoff Funeral Home.

John Dennis Concannon, 71, of Traverse City passed away Monday, November 4, 2019 at Munson Medical Center with his loving wife at his side. John was born on April 28, 1948 in Hamtramck, Michigan to the late Patrick and Mabel (Fisher) Concannon.... View Obituary & Service Information

The family of John Concannon created this Life Tributes page to make it easy to share your memories.