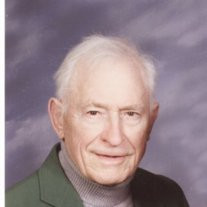 Traverse City-John K. Crane Jr, 87, of Traverse City, died Tuesday evening, February 5, 2013 at Munson Medical Center. Born January 27, 1926, in Fort Scott, KS, he was the son of the late John and Emma (Snyder) Crane. On August 12, 1949, in Chickasha, OK, he married the love of his life, the former Ima Jean Ratliff. He faithfully served his country with the United States Navy Air Corps during World War II. John attended and graduated from Oklahoma State University where he received his Bachelor Degree in Engineering. He was a long time member of Central United Methodist Church and Rotary International. Being a retired engineer, John also taught Petroleum Courses at Northwestern Michigan College Technical Center. John was a very active man and had many interests and pursuits such as golfing and fishing. John was a shoulder to lean on, and ear to listen, and a fierce champion of those he loved most. He will be sorely missed by his family and a large host of friends. John is the beloved husband of Ima J. Crane, of Traverse City; dear father of John (Izzie) Crane III, of Pleasanton, CA , Richard (Nancy) Crane of Holland, Cynthia (Richard) Johnson, of Longwood, FL. , Mark (Crystal) Crane, of Montpelier, VT; and loving grandfather to Ian, Jeremy, David ,Tim, Sam, Julie, Danielle, Josh, Natty, Ben and Gabe Crane. He was preceded in death by one sister, Kathleen Crane. For those who would like to celebrate John's life, a memorial services will be held at Central United Methodist Church on Monday, February 11, 2013, at 11:00 A.M, with visitation one hour prior to the service. Rev. Dale Ostema will officiate. In remembrance of John, memorial contributions may be directed to Central United Methodist Church. Kindly share your memories with the family on their online guestbook at www.reynolds-jonkhoff. Arrangements were made with the Reynolds-Jonkhoff Funeral Home and Cremation Services.

The family of John Kenton Crane created this Life Tributes page to make it easy to share your memories.