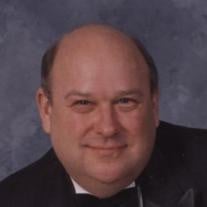 John F. Dickason, 67, of Traverse City , passed away Thursday, September 27, 2012 at Munson Medical Center in Traverse City. John was born April 6, 1945 to the late Gerladine Alice (Broyles) and John Wayne Dickason in Toledo, OH. Following high school, he studied at Michigan State University where he earned his DVM degree. The son of an engineer, John spent summers working with his Dad. He enjoyed engineering and turned this interest into his career in the computer field, in which he was naturally gifted. In the 1980's, John moved to Traverse City, where he established Accucomp Computer Systems, Inc. and along with his business partner, Denny Ray, it has become one of the areas most viable computer companies. In addition to his love of animals, John was a gifted story teller, who also enjoyed woodworking, snowmobiling and golfing with his brother- in- law. On February 14, 1998 in Cadillac, John married the love of his life, Mary Franke and together they enjoyed traveling and many "special mystery trips". John was very social and had a big heart. He will be missed by many. John is survived by his wife Mary; by his siblings, Richard (Marvil) Dickason of Ojhi, CA; Nancy (Tom) Terres of Bath; his extended family, Sara (Keith) Botkins of Lapeer and Ann Franke of Traverse City, along with his nieces and nephews, who he treasured. Also surviving are his special friends and beloved pets, Sally and Julie. He was preceded in death by his parents and a sister, Dorothy May Fagg. Visitation for John will begin at 10 a.m. Monday, Oct. 1 at The Reynolds-Jonkhoff Funeral Home . The Service celebrating John's life will begin at 11 a.m., also at the funeral home. Burial will take place in Maple Hill Cemetery in Cadillac in a private family setting. The family asks that John be remembered through memorial contribtutions to A.C. Paw, P. O. Box 94, Acme, MI 49610 or online at www.acpaw.org. Please share thoughts and memories of John with his family by way of his online guest book at www.reynolds-jonkhoff.com. The family is being served by Reynolds-Jonkhoff Funeral Home and Cremation Service.

The family of John F. Dickason created this Life Tributes page to make it easy to share your memories.