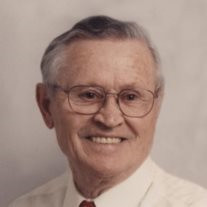 John Louis "Gunner John" Fasel of Traverse City went home to be with the Lord on January 20, 2014 peacefully with his family by his side. John was born January 27, 1927 in Hannah, Michigan to Matthew and Anna Laura(Bushamp) Fasel. At the age of 18 John joined the United States Army. He served during WWII and was stationed in Okinawa and Nagasaki, Japan. After returning home he married Anita "Cookie" Delancey on November 14, 1947 in Traverse City. Over the years John and Anita raised six children. John worked at Parson's and Parts MFG. for many years. He also worked at Joslin Chevrolet for a short time and many local gas stations. John finally decided to go into business for himself and in 1971 opened John's Car cleaning which he owned and operated until his retirement. On his journey thru life John's love for family and friends and spending time with all of them was first and foremost. Anyone who knew John knew his second love was the outdoors, wheather it was fishing along the banks of the Boardman, a day of squirrel or rabbit hunting or that ultimate deer hunting adventure to bag that "Big Buck" ,John was always ready for the hunt. John also enjoyed bowling for many years and was a huge Detroit Tigers fan, wheather he watched the game on TV or listened to it on the radio it didn't matter as long as his Tigers were on. John also spent many years camping with his family and friends at his cabin in the U.P and out in Brown Bridge, all of these trips will forever be treasured by all of his family and friends. John is survived by his wife of 66 years Anita "Cookie" and six children. Laura Ann Fisher of Traverse City, Lyn (Jim) Woodworth of Grawn, Denny (Colleen)Fasel of Traverse City, Gail (Bob) Wiser of Grawn, Greg(Marie) Fasel of Traverse City and Sherry(Doug) James of Kalkaska. NIne grandchildren; Randy Woodworth, Lisa (Mark) Harrand, Treena (Jeremy) Guntzviller, Stephen (Amy) Wiser, Jared Fasel, Clarissa and Hannah Fasel, Preston and Brayden James, five great grandchildren; Hayden and Wyatt Guntzviller, Annastasia Walter, Lauren Wiser and Isabelle Northrop. John is preceded in death by his parents, sisters; Evelyn King, Christina Whipp and Theresa Berry, brothers ;Lawrence and Francis "Fritz"Fasel. In lieu of flowers memorials my be made in John's memory to The Journey Wesleyan Church, 2825 W. S. Airport Rd., Travers City, Mi 49684. Visitation will be held on Thursday January 23, 2014 at The Reynolds-Jonkhoff Funeral Home from 4-8PM with a funeral service on Friday at the Journey Wesleyan Church at 11AM with visitation one hour prior. Interment will follow at Grand Traverse Memorial Gardens with Military Honors. Please visit reynolds-jonkhoff.com to share your memories of John.

John Louis "Gunner John" Fasel of Traverse City went home to be with the Lord on January 20, 2014 peacefully with his family by his side. John was born January 27, 1927 in Hannah, Michigan to Matthew and Anna Laura(Bushamp) Fasel. At the age... View Obituary & Service Information

The family of Mr. John Louis Fasel created this Life Tributes page to make it easy to share your memories.