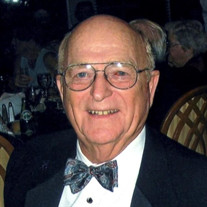 John Greeno, 85, of Tequesta, Florida and Lake Leelanau, Michigan died October 12, 2020 at Munson Medical Center in Traverse City, Michigan. Born on September 3, 1935 in Cincinnati, Ohio to the late John Rankin and Ella Louise (Squibb) Greeno, John grew up in Cincinnati and attended Western Reserve Academy and the University of Cincinnati. John met his future bride, Christine Corell, on a blind date while they were in high school. After several years of dating, John and Christine were married in Cleveland, Ohio on June 28, 1958. They moved to Cincinnati, Ohio where John owned and operated manufacturing businesses. Together they raised their family in Wyoming, Ohio; Winchester, Kentucky; and Indian Hill, Ohio and, in the process, formed many lifelong friendships. John was devoted to both family and friends; these relationships all brought immeasurable joy to his life and vice versa. Immensely proud of his four children, John loved each one dearly and deeply; he loved nothing more than presiding over a family-filled dining table, heaping each plate with Christine’s amazing cooking, and sharing humorous stories with all. In addition to his family and friends, John’s passions included golf, piloting his airplane, fly-fishing, and, above all, spending time at his cottage on Lake Leelanau in Michigan. John’s grandfather, the Colonel, had purchased land on the lake in 1905, and John spent as many days as he could spare at the lake, every summer for 85 years. While his grandchildren loved visiting him wherever he was, they especially loved visits to the cottage, where they “helped” their Bop move sand piles, stack wood, fish for trout, take his daily bath in the lake, and savor that night’s dessert with an ice-cold glass of milk. In partnership with Greeno family descendants and the Leelanau Conservancy, John led the creation of the Greeno Preserve, cementing his family’s Leelanau legacy for generations. John and Christine retired to Tequesta, Florida, where John volunteered weekly at Jupiter Medical Center, served as President of the condominium association board, and formed and relished his many friendships. Having never met a stranger, John’s big personality brought joy and laughter to many everywhere he lived. John is survived by his beloved wife, friend and partner of 62 years, Christine; their children Ed (Laurie) Greeno, Pam Johnson (Jack Denver), Anne (John) Decker and Paula Greeno; and grandchildren Christopher and Jonathan Greeno, Emily and Sara Decker, Jordan and Taylor Greeno. John was preceded in death by his parents and sister Juliet Greeno Hadden. John's family will celebrate his life privately, with interment in the Greeno family section at Spring Grove Cemetery in Cincinnati. In lieu of flowers, memorial contributions in his honor may be directed to the Leelanau Conservancy,105 1st St, Leland, MI, 49654, or to the Western Reserve Academy, 113 College St, Hudson, Ohio, 42236.

The family of John Squibb Greeno created this Life Tributes page to make it easy to share your memories.