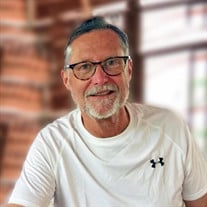 John Frederick Hagen, 70, of Traverse City, died on Saturday, July 25, 2020, having yielded gracefully to complications of a decade-long battle with younger-onset Alzheimer’s disease. John grew up in the Boardman neighborhood of Traverse City in the 1950s, and his childhood was an idyllic one where, on summer nights, best friends slept in backyard tents, played capture the flag and war games, chased one another through alleys on bikes, and attended Boy Scouts jamborees together. Many of the friends John made in those early years remained so throughout the decades, staying in close contact right up until the end of his life. A lifelong student of the Great Lakes and her freshwater ecosystems, John was intimately attuned to the geographical, historical, cultural, folk, and sacred knowledge of northern Michigan, and he held the natural world close, particularly as his Alzheimer’s advanced. On walks with his family, John continued to seek out nature’s precious artifacts -- pine cones, small stones, bird feathers, tree bark, leaves, and acorns. He studied tree tops for his favorite corvids perched among branches and leaves, listened for the occasional loon sounding overhead, and looked with anticipation to neighbors’ yards known for clucking chickens or lounging rabbits. John loved travel, Michigan beer, poetry, Bob Dylan, North American and Latin jazz, birdsong, and the Arizona desert. John was an Eagle Scout, outdoorsman, conservationist, sailor, and fly fisherman. He was a brother, father, husband, and friend. John was also committed to destigmatizing Alzheimer’s disease and other forms of dementia; to that end, he shared his diagnosis freely with friends, family, and plenty of others he met along the way. Early on he stated simply, “There’s no shame in Alzheimer’s.” But long before Alzheimer’s set in, John studied and worked, fell in love, married, and embraced becoming a parent, the most rewarding role of his life. These are the details: John graduated from Traverse City (Central) High School, obtained a bachelor’s degree in sociology from Michigan State University (1968) and an MBA from University of Detroit (1985). He forged a long career in communications and government relations, beginning as a reporter for the Traverse City Record-Eagle and Oakland Press newspapers before pivoting into roles in state politics and then to the private sector with General Motors Corporation. In 1987, John accepted a faculty position teaching journalism and public relations at Northern Arizona University in Flagstaff. While residing in Flagstaff, he also founded a public affairs firm representing various organizations including the U.S. Forest Service and Hopi Tribe. John met Deirdre Mahoney, of Litchfield Park, Arizona, soon after moving to Flagstaff. They were married in Sedona in 1990, and welcomed son Jack in 1991. During this period, the family moved to the Phoenix area where John worked as Deputy Director for the Arizona Department of Agriculture and then Acting Director for the Arizona Department of Environmental Quality. By 2000, John could no longer ignore the lure of northern Michigan nor the small midwest town that had been so influential during his formative years, and so the family relocated to Traverse City, where John helped launch an early chapter of the Watershed Center of Grand Traverse Bay. In the final stretch of his career, he worked as a grant writer for Gourdie-Fraser. In retirement, John taught as an adjunct instructor at Northwestern Michigan College and volunteered with the Maritime Heritage Alliance. John is survived by his wife of thirty years, Deirdre Mahoney; son John “Jack” of Traverse City, Michigan; brother Jim (Jeff Oishi) of Minneapolis; sister Kathy Wilson (Dave) of Indialantic, Florida; an aunt and uncle, many in-laws, nieces, and nephews. John was preceded in death by his parents, James Harold Hagen and Katherine “Kitty” Mitchell Hagen. A celebration of life will be held in the garden at Reynolds-Jonkhoff Funeral Home Friday, July 31. Visitation is from 4 - 5 p.m. with remarks beginning at 5 p.m. Social distancing will be practiced. The family suggests honoring John’s life by planting a tree in honor of a loved one or making a contribution to The Anglers of the Au Sable River, an all-volunteer organization committed to environmental conservation.

John Frederick Hagen, 70, of Traverse City, died on Saturday, July 25, 2020, having yielded gracefully to complications of a decade-long battle with younger-onset Alzheimer&#8217;s disease. John grew up in the Boardman neighborhood of... View Obituary & Service Information

The family of John F. Hagen created this Life Tributes page to make it easy to share your memories.