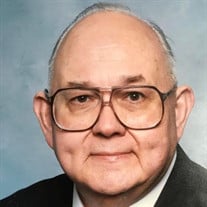 John Marshall Harlan, 87, peacefully passed away on May 22, 2021 at Northport Highlands. Born on Sept 23, 1933 in Birmingham, Michigan to C.Allen and Ivabell Harlan. He attended the University of Michigan, graduated in 1956 with a Bachelor of Science in Electrical Engineering with honors from Eta Kappa Nu and Tau Beta Pi Honor Societies. He married the love of his life, Elizabeth (Beth) Henninger On Feb 18, 1956. John excelled as President and CEO of the family-owned Harlan Electric Company ('63-'95) in Southfield. He successfully developed Harlan Electric to a point where it was recognized by Engineering News Record as the nation's 10th largest Electrical Contractor ('95). As an outstanding leader in the Detroit business community, John was was a member of the International Brotherhood of Electrical Workers Union. Other achievements include: Science and Engineering Fair of Detroit, Director and President ('64-'95); Southfield Chamber of Commerce, Director and President ('67-'73); Federated Electrical Contractors, President ('68-'73), Emeritus ('95); Marygrove College, Trustee ('71-'74); National Electrical Contractors Association, Southeastern Michigan Chapter, Director and President ('73-'95), NECA Fellow ('93) and NECA Man of the Year ('83); National Construction Employers Council, Director ('78-'82); Lawrence Technological University, Trustee ('81-'96); Engineering Society of Detroit, Director ('82-'88), Fellow ('88); Construction Association of Michigan, President ('90-'95); MYR Group, Director ('95-'00); Pieper Electric Company, Director ('01-'08). He wrote 19 industry papers and was a popular speaker at many electrical leadership conferences across the nation. To enrich the local academic community, he became a philanthropist and began the Harlan Foundation to endow many schools and universities. He used his time, connections and funding to further higher education including: The University of Michigan, Lawerence Technological University, Ferris State University, Marygrove College, Wayne State University, University of Detroit Mercy and others. John and his loving wife, Beth, enjoyed many wonderful trips to exotic locations worldwide. He loved boating, and became a 3-star Navigator with the Birmingham Power Squadron. He also loved being a rock hound, and served as President of the Traverse City Rock Hounds. He was an early adapter of technology, even building his first computer in the dining room. He could double whistle. His personal philosophy is summed up by his observation that “I don't have any problems... I only have opportunities!” We will miss his leadership and 'S-Go! spirit. John was proceeded in death by his beloved wife, Beth and his oldest daughter Trish. He is survived by daughters Diana Harlan Stein (David), and Sandra Harlan McAndrews (Mike); and his grandchildren, M John McAndrews, John Forrest Schumacher, Kathryn Kelly Schumacher, Jeffrey Harlan McAndrews, and Sabrina Fathom Stein. His memory will be cherished by his siblings: Joyce (Bruce), Jim (Carol), Joe (Chrissy), Jay Scott (Sonia), and Jeanne. He will be laid to rest next to his beloved wife Beth at the Eden Glen Lutheran Memorial Park in Livonia in a private family gathering. In lieu of flowers, please make a donation to an educational institution to forward science and engineering.

John Marshall Harlan, 87, peacefully passed away on May 22, 2021 at Northport Highlands. Born on Sept 23, 1933 in Birmingham, Michigan to C.Allen and Ivabell Harlan. He attended the University of Michigan, graduated in 1956 with a Bachelor... View Obituary & Service Information

The family of John Marshall Harlan created this Life Tributes page to make it easy to share your memories.