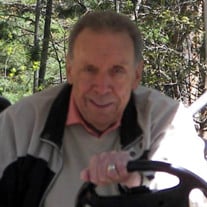 John Aral Hays, returned to his heavenly home on Sunday, September 6, 2020 after a valiant battle with septic shock and failing lungs. He was 84 years of age. John was born on Nov. 21, 1935 in Crane, Texas to the late John Fielding and Mildred Annie (Conklin) Hays. John graduated from Crane High School in 1955. He enrolled at Odessa College the next fall. While there he struck up an acquaintance with Roy Orbison. John left college and enlisted in the U.S. Navy and was sent to San Diego, California. After a medical discharge from the Navy, John returned to West Texas, where he worked as a police officer in Monahans. He later became a Deputy in the Ector County Sheriff’s Department in Odessa. After his career in law enforcement, he owned and operated an Esso (later Exxon) gas station in Odessa. In 1977, John became a district sales manager for Reed Tool Company, delivering drill bits to the oil wells in Michigan, Illinois and Indiana. He retired in 1990 and moved to Jacksonville, FL with his bride, Leslie L. Hays. Together, they began a new venture as owners of MFL Lender Services. John retired from the mortgage business in 1996 and returned to Traverse City. He was an avid bowler, golfer and throughout his retirement he enjoyed working at Mitchell Creek, Mistwood and The Crown Golf Courses. “A Texan by birth, a Gander at heart”, was John’s motto. John is survived by his loving wife, Leslie, two sons; Shawn (Anne) Hays and Bradley Hays, a stepson, Trevor Mattis and a brother, Richard (Lana) Hays. Also surviving are five grandchildren, four great-grandchildren, nieces, nephews and many extended family members. He was preceded in death by his parents, two brothers; J. Fielding Hays and Kennard Hays, two sisters Bobbye Byrl Trice Chenault and Jonquil Hays and his daughter, Tawny Lynn Hays. The Hays family would like to extend a heartfelt thank you to the staffs of Munson ICU, Traverse Heart and Vascular, Pulmonology & Critical Care, Respiratory Care and Palliative Care for their outstanding care of our precious Texan. Due to the covid-19 situation, a celebration of John’s life is being planned for a later date. Those planning an expression of sympathy may wish to consider a memorial donation to Horse North Rescue or Silver Muzzle Cottage. Please feel free to share your thoughts and memories with John’s family at his tribute page at www.reynolds-jonkhoff.com. The family is being cared for by the Reynolds-Jonkhoff Funeral Home and Cremation Services.

John Aral Hays, returned to his heavenly home on Sunday, September 6, 2020 after a valiant battle with septic shock and failing lungs. He was 84 years of age. John was born on Nov. 21, 1935 in Crane, Texas to the late John Fielding and Mildred... View Obituary & Service Information

The family of John A. Hays created this Life Tributes page to make it easy to share your memories.