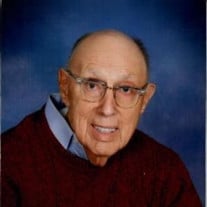 MIAMI, FL - John Dean Hunt of Monroe Center passed away on Friday, November 20, 2020 at Prestige Care Aventura Assisted Living Facility in Miami, FL. John was born in Owosso, MI on July 18, 1926. He was son of Elias Comodore Hunt and Elnor Mae Ireland Hunt. He attended the two-room school in Henderson, MI graduating from the eighth grade. He was also a graduate of Owosso High School, Central Michigan University and Michigan State University. John was a veteran of WWII and served with the 40th infantry division in the Southern Philippines. On August 1, 1953, he and Anna Marie Lewis united in marriage at the old Grawn United Methodist Church. This union lasted 55 plus years until Anna’s death on September 20, 2008. John was also preceded in death by his parents, a brother Clair, a sister Edna, a son Charles C. Hunt, and from the extended family Homer Gumbs. Surviving John are five children, eleven grandchildren and three great-grandchildren. Catherine (Jack Teachout), and their daughter Chelsea (Kelsey Clampitt) Hunt-Teachout; John Jr. (Alison) and their children Alyssa (Anthony) Joya and John Dean III; Jean Ann (David Stone) and their children Josh, Ryann, Ian, and Keenan; Connie Lynn Hunt; Jodi Dee and children Danilo and Jefferson; daughter-in-law Deborah Hunt and children Katelyn (Jeffrey) Horn and their daughter, Olivia Grace and son, Hunter; and Lauren (Aaron) Vermeersch and their son Arthur. He is also survived by the extended family, Chandler and Carol Gumbs and their children; Goffe and Lyneth Gumbs and their children; and Deb Gumbs and her children. John retired from the Chesaning Union Schools. John and Anna were active members of numerous Lions and Lion Pin Trade Clubs. Anna accepted Jesus Christ as her Lord and Savior as a teenager. Although John attended church with her in the early years of their marriage, it took him 13 years after their marriage to do the same. A celebration of John’s life will take place at 11:00 am on Tuesday, December 1st, 2020 at Reynolds-Jonkhoff Funeral Home with a visitation beginning at 10:30 am. Family and friends are welcome to visit www.rjfh.tv to view the service live at 11:00 am on Tuesday. John will be laid to rest at Maple Grove Cemetery in Grawn. In lieu of flowers the family suggests memorials be given to a charity of one’s choice.

The family of John Dean Hunt created this Life Tributes page to make it easy to share your memories.