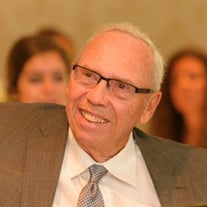 John (Jack) Emmet Gillen, 89, of Traverse City and Venice, FL, passed away on March 30, 2022, following a short illness. Jack was born November 24, 1932, in Ludington to Vena (Piper) and John Lee Gillen. Jack was the eldest of four siblings, growing up in Dowagiac, MI. He graduated from Dowagiac High School in 1950. During his youth, he was an accomplished athlete. Jack excelled as a lineman on his high school football team. His nickname, “The Beast”, was earned because of his intensity on the field. He went on to participate in collegiate sports at Michigan State University. Jack was on the practice team for MSU football during their national championship years from 1950-1954. He would joke, “I was on the football team and played everyday, except Saturdays.” Jack loved his time at MSU where he was also a brother in the Phi Kappa Tau fraternity. While at MSU, Jack earned a scholarship in the Reserve Officer Training Corps (ROTC). Upon graduating in 1954, Jack received a commission as 2nd Lieutenant in the United States Air Force and commenced pilot training at Bartow AFB in Florida. Jack received his multi-engine rating and earned his pilot wings on April 27, 1956, the day his son Dave was born. Dave would also become a general aviation pilot. A testament to his skill as an aviator, Jack flew a wide variety of aircraft, ranging from the B-25, B-119, C-130 and trained on the F-86 Super Sabre. His grit and fortitude earned him the nickname “Impervious” from his pilot training class, 56M. During one of his missions in active duty, Jack flew troops and supplies for the construction of the Distance Early Warning (DEW) Line in the Arctic. The conditions of the Arctic were dangerous and Jack often had to rely on only celestial readings and a sextant for navigation. He went on to become a Major and served in the reserves until 1968. Years later, along with his son Dave, Jack enjoyed attending reunions of his pilot training class. Jack had a deep desire for self sufficiency and an entrepreneurial spirit that developed in his youth. His first sales job was hustling Cuticura soap door-to-door as a 12 year old. Jack went on to have a successful career as a stockbroker, working for Merrill Lynch, EF Hutton and in his later work life, AG Edwards, where he was also Vice President and Branch Manager of the Traverse City office. He left the brokerage business between 1970-1980 when he owned and managed Crystal Harbor Marina at Glen Lake. Jack bought the marina to afford his children working opportunities that come from a family-owned business. Jack’s decision to pause his career as a broker gave his kids the gift of being raised in Glen Arbor where the family has their best memories. Living in Traverse City since 1984, Jack was active in the Elks Club and a member of the Traverse City Country Club. Jack married his great love, Barbara Bensley, in 1988. He was able to enjoy many of life’s pleasures with Barb in their 34 years of marriage. He loved nothing more than a good game of golf followed by a nice meal and drink with Barb. Ever the competitor, it was much to Jack’s chagrin that Barb usually won those golf games. Jack had many medical hurdles over the years and Barb took loving care of him, for which his children will always be grateful. Jack was a dedicated father of six. He demonstrated a strong work ethic and drive to his children and enjoyed spending time with them watching sports and movies. Jack taught his kids the importance of always planning for the future. Jack showed his family the value of relationships with his many life-long friendships. Jack passed his love of sports on to his family and could often be found pacing the sidelines of his sons’ games. His family and friends have many fond memories of loud, rowdy football and basketball-watching parties in Jack’s basement where he had the perfect setup for cheering on his beloved Spartans. Jack cherished a good time and would want those who loved him to raise a glass in his honor. Jack is survived by his wife Barbara of Traverse City, sons Jack, Jr. of Cassopolis, Dave (Kathy) of Fort Lauderdale, FL, Tim (Sue) of Traverse City, Joe (Haley) of Toronto, Canada, daughter Kate (Will) Sondgerath of Lafayette, IN, step-son Jeffrey Bensley of Traverse City and brother Dick (Tracey) of Crossville, TN. He also is survived by 15 grandchildren and 12 great-grandchildren. He is predeceased by his parents, son Andrew, sister Susan Montgomery, brother Jerry, nephews Scott Gillen, Mark Montgomery and former wife Nancy Ward. In lieu of flowers, please consider donating to the Football Excellence Fund at Michigan State University at www.givingto.msu.edu A memorial service will be announced at a later time. Kindly share thoughts and memories with Jack’s family at www.Reynolds-Jonkhoff.com

The family of John (Jack) Emmet Gillen created this Life Tributes page to make it easy to share your memories.