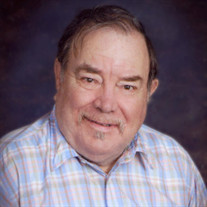 TRAVERSE CITY – John “Jack” A. Ward, age 80, of Traverse City passed away Saturday, August 4, 2018 at the Munson Medical Center in the loving care of his family. Jack was born in Owosso, MI on December 29, 1937 to John and Beatrice (McClain) Ward. Jack attended school in Owosso, and was a high school football player. Jack’s dad, John, was a contractor in Owosso, and often times Jack would help his father on various projects. Jack worked for GM as a lineman where he retired after 30 years of service. Jack met his wife of 42 years, Avis (Overholt) Ward and together the two were married on May 29, 1976 in Henderson, MI. Together Jack and Avis enjoyed camping, boating, and one of their favorite trips of all was to Dollywood. In 2003, Jack and Avis decided to make Traverse City their permanent home as Avis accepted a position as Administrative Assistant at Bayview Wesleyan Church in Traverse City, where they both became active members. Jack loved to hunt, fish, and spend time with his family. He was an active volunteer for many years with Love In The Name of Christ. Jack is survived by his wife, Avis Ward, Traverse City, children; Kelley (Jim) Sterk, Traverse City, Rebecca Call, Owosso, John (Kellie) Ward III, Ashley, MI, Jackie (Eric) Mueller, Laytonsville, MD, grandchildren; Joshua Ward, Pflugerville, Texas, Erica Zepeda, Courtney Jones, both of Owosso, Duane Call, Ovid, Justin Sterk, Grand Rapids, Jordan Sterk, Owosso, Allison, Derek, and Heather Ward, all of Ashley, MI, Grace and Carlyn Mueller, both of Laytonsville, MD, great-grandchildren; Reagan Ward, Pflugerville, Texas, Halima Fouad, Arianna and Kinsley Zepeda, all of Owosso, Connor and Charlie Call, both of Ovid, MI, and his siblings; Donna (Gerald) Rose, Grand Rapids, Ruth McKay, Pendleton, SC, Delores (Jim) Schulyer, Owosso, and Charles Ward, Owosso. Jack is also survived by many nieces and nephews. Jack was preceded in death by his parents, and son Rick Ward. A memorial service for Jack will be held at 11:00 am on Saturday, August 11, 2018 at the Bayview Wesleyan Church with a visitation one hour prior to the service. Pastor Jack Steenbergh will officiate. A luncheon will be held immediately following the service. Bayview Wesleyan Church is located at 720 Wayne St. in Traverse City. In lieu of flowers the family asks that memorial contributions be directed to, Love In The Name of Christ, P.O. Box 88, Cadillac, MI 49601.

The family of John "Jack" A. Ward created this Life Tributes page to make it easy to share your memories.