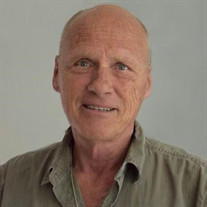 TRAVERSE CITY – John Barton Collings, Jr. (JB), 67, departed this world on his final voyage home, surrounded by more than a dozen loved ones and his beloved dog. Born in 1951 in Battle Creek, MI, JB grew up in Cedar and graduated from Traverse City High School in 1970. He volunteered for the U.S. Army during the Vietnam conflict and served as a dog handling specialist. After completing his time in the service, he returned to the Traverse City area and graduated from the Great Lakes Maritime Academy in 1982. For the next 20 years, JB sailed as a merchant marine officer and captain on voyages all around the world, experiencing many cultures and making friends in many countries. In 2002, he returned to his Midwest roots and sailed for another 15 years on commercial vessels on the Great Lakes before retiring in 2017. JB loved people and pets. He had a quick wit, a big heart and the ability to make friends with everyone he encountered. He always had a smile and a clever line that made a person feel important and at ease. In recent summers, he and his German Shepherd would often be seen on Front Street in Traverse City, meeting and chatting with strangers along the way. JB had a deep concern and affection for his many close friends. This was a daily part of life from his earliest days, until death. In addition to his travels around the world, JB loved fly-fishing, camping, and hiking in beautiful northern Michigan with his dog. He was able to accomplish his final bucket list wish this past year when he traveled to see the Redwoods with his friends known as the “Fab Four”. He was an avid reader who enjoyed listening to a wide range of music and picking away on his guitar during quiet times. JB was a talented artist who enjoyed doing pen and ink drawings of nature scenes, animals and portraits of his favorite pets and people. JB is survived by his friends and family. He was preceded in death by his parents, Col. John Barton Collings, Sr., and his mother June (Lake) Collings. A Celebration of JB’s life will be scheduled in the spring of 2019. Service information will be published in a later edition of the Record Eagle. Donations in memory of JB Collings may be made to, Cherryland Humane Society, 1750 Ahlberg Rd, Traverse City, MI 49696, or Make-A-Wish America Gift Processing, 1702 East Highland Ave., Suite 400, Phoenix, AZ 85016.

TRAVERSE CITY &#8211; John Barton Collings, Jr. (JB), 67, departed this world on his final voyage home, surrounded by more than a dozen loved ones and his beloved dog. Born in 1951 in Battle Creek, MI, JB grew up in Cedar and graduated from... View Obituary & Service Information

The family of John "JB" Barton Collings created this Life Tributes page to make it easy to share your memories.