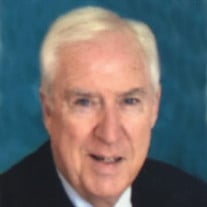 John Lawrence McNamara, 79, of Lake Leelanau, Michigan, passed away on September 21, after a long struggle with cancer. John was born on March 31, 2938, in Ionia, Michigan, the son of Martin D. and Mildred E. McNamara. He graduated from Campion Jesuit High School in Prairie du Chien, Wisconsin in 1956. After graduating from high school, he attended University of Michigan and received his undergraduate degree in 1960 and law degree in 1963. Upon graduation from law school, John returned to Ionia and began his over-30-year legal career, first with the law firm of O’Connor, McNamara and O’Keeffe, which later became the law firm of McNamara, O’Keeffe and Sykes. During his career, he also served as the attorney for the City of Ionia and for many of the surrounding communities in Ionia County. In 1964, he married Nancy Fineis, also of Ionia, who survives. They were married for 53 years. Also surviving are his daughter, Molly (J.B.) McNamara-Allen of Oak Park, Illinois, and son Dan (Sarah) McNamara of Traverse City, Michigan, along with grandchildren Hayden and Jack McNamara, and Maggie, Seamus and Bridget Allen. He was a member of several community organizations, S.S. Peter and Paul Church, the Ionia Country Club, Ionia-Montcalm Counties Bar Association, and a 50-year member of the Michigan Bar Association. Upon retirement, he and his wife moved to Lake Leelanau where he was a volunteer for the Leelanau Christian Neighbors Food Pantry and an instructor on the Inland Seas School Ship. He attended St. Mary’s Church in Lake Leelanau. John was a voracious reader and also enjoyed sailing, skiing, and socializing with family and friends. He always loved telling and hearing a good joke. His friendliness and sense of humor were the qualities that endeared him to all who were fortunate enough to know him. A family memorial service will be held at a later date in Ionia. Memorials may be directed to Leelanau Christian Neighbors, 7322 East Duck Lake Road, Lake Leelanau, Michigan 49653.

John Lawrence McNamara, 79, of Lake Leelanau, Michigan, passed away on September 21, after a long struggle with cancer. John was born on March 31, 2938, in Ionia, Michigan, the son of Martin D. and Mildred E. McNamara. He graduated from Campion... View Obituary & Service Information

The family of John Lawrence McNamara created this Life Tributes page to make it easy to share your memories.