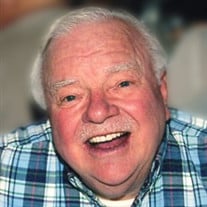 John Jay Meyers, 79, of Traverse City died Thursday, August 28, 2014 at Munson Medical Center in Traverse City. John was born on Saturday, March 2, 1935 to the late Leo and Grace (Smith) Meyers in Ann Arbor. John graduated from Ann Arbor Pioneer High School in 1952 and was a Graduate of the College of Business at Eastern Michigan University. In 1957 John earned the distinction of working on the building of the Mackinaw Bridge. He married Barbara Gayle Whitson on Friday, March 16, 1979 in Traverse City. John had been a resident of Ann Arbor prior to moving to Traverse City in 1970. Prior to his retirement, John had been an independent insurance salesman and had been a sports official for MHSAA for many years. John was a member of Central United Methodist Church, Northwestern and Washtenaw Insurance and Financial Advisors Associations, Betsie Valley and Northern Sports Officials Associations, the University of Michigan Alumni Association , SPEBSQSA-Traverse City Cherry Capital Chorus and Kappa Phi Alpha Fraternity. He was everything U of M. Go Blue!! John is survived by his wife Barbara; his sons, Jay Bayard (Nanette) Meyers of Mayfield and John Paul (Jody) Meyers of Traverse City; a stepdaughter, Susan (Jay) Oakley of Spotsylvania, VA, stepsons, Jeffrey (Lynn) Blackmore of Weaverville, NC, John (Jane) Blackmore of Jacksonville, NC and David Blackmore of Traverse City, 12 grandchildren, 1 great grandson 4 nephews and several cousins. John was preceded in death by his parents and his daughter Grace Anne. Visitation f for John will take place beginning at 2 P.M. Sunday, Sept. 14 at Central United Methodist Church followed by a service of celebration of John's life at 3 P.M., also at the church. Pastor Dale Ostema will officiate. . Inurnment will be in the Columbarium of Central United Methodist Church. Memorial contributions may be directed to the charity of one's own choosing. Please share your memories of John with his family by way of his online guest book at www.reynolds-jonkhoff.com. The family is being served by Reynolds-Jonkhoff Funeral Home and Cremation Services.

The family of John Jay Meyers created this Life Tributes page to make it easy to share your memories.