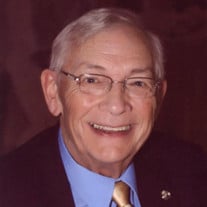 John Junior Ort, 87, of Traverse City, passed away December 28, 2016. John was born March 8, 1929 to the late John C. and Dora (Kirkpatrick) in Bad Axe, MI. Close loved ones and friends will fondly recall the stories John told about his birthplace. John remembered with great fondness many of his teachers who influenced him and he decided to make teaching his chosen career. After graduating high school, he attended Central Michigan University, then U of M where he earned a master’s degree in industrial education. Later he earned a certificate in guidance and counselling at Wayne State University. John spent his career first as an Industrial Arts teacher at Bentley and Franklin High Schools in Livonia and then later as a guidance counsellor. He was the president of the Livonia Education Association, president of the Michigan Education Association in 1971-72 and a life member of the National Education Association. He was a delegate to the NEA for many years and was notably one of the biggest advocates for the teachers. In 1982, he married Penelope Doss in the Universalist Unitarian Church of Farmington, MI and they blended two families into one. He will always be known for his generosity and compassion to everyone. He was the story teller of story tellers and his humor was contagious. He was the backyard wildlife refugee in the neighborhood and the local pool shark at the Senior Center. In his earlier years he was a duck hunter, a downhill skier, and later an avid golfer. Surviving John and missing him dearly are his wife, Penny, daughter, Amy (Peter) Blakeley, son, James (Debbie) Ort and step children; Pamela (James) Tinsley, Timothy Doss and Leslie (Steven) Arquette and many grandchildren, nieces and nephews. John is preceded in death by his parents, his first wife Pat, his son John and his brothers, Robert and Richard. A memorial service celebrating John’s life will be held on Friday January 13, 2016 at the Unitarian Universalist Congregation of Grand Traverse at 1:00pm with a visiting time one hour prior. The family would like you to consider memorial contributions in John’s name be directed to the Unitarian Congregation or to the Father Fred Foundation. Please visit www.reynolds-jonkhoff.com to share your memories with the family. The family is being cared for by the Reynolds-Jonkhoff Funeral Home and Cremation Services.

The family of John Ort created this Life Tributes page to make it easy to share your memories.