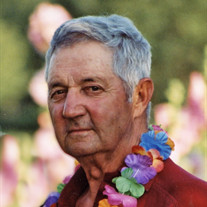 John R Pulcipher passed away Tuesday morning April 15th at Hope Village in Acme Michigan. He was born April 7th 1927 in Acme with his twin George and wed Marilyn Stiefel, of Dimondale, Mi on September 17th 1955. John served his country during World War II as a seaman in the U.S. Navy. He and George were commissioned on the destroyer USS Hazelwood. After his discharge he returned to the area he loved, Traverse City. John was a avid fisherman and hunter for his entire life. When work allowed, you could find him on the bay with his buddies fishing for perch and white fish and in the winter on the ice at Elk Lake. He knew the best fishing holes like the back of his hand purely by sight and landmarks. He also was quick to share his bounty, offering his days catch to friends and family. He was part and then sole owner of the Lone Pine Lodge in Nisula Mi. This was what he considered his second home and enjoyed the hunting, nature, neighbors and camaraderie of his family and friends. He took great pride in retelling the stories of every rack of horns ever mounted and could recount the exact location and the specifics of each hunt. Pulcipher Orchards was the source of immense pride. He truly enjoyed being a cherry grower and worked the family farm all of his life, Marilyn by his side. He was involved in various organization and councils in the cherry industry. He was a hard worker and for several years worked in Elk Rapids at super tool company nights to supplement the family income. He was always touted as saying, "you can expect an honest day's pay for a hard day's work". Between the immaculate orchards and Marilyn's flower gardens the farm was beautiful and recognizable locally by those who would drive. Many people who drove frequently commented on the Pulcipher Orchards water tank, proudly perched on the family barn. John is survived by his three children;. John and Georgia (Atchison) of Acme Michigan, Julie Pulcipher of San Marcos, Texas and Gina and Richard Griffis of Rockford, Michigan. Another special person Molly Pulcipher his sister in law and wife to George. He has 5 Grandchildren; John , Morgan and Jennifer Pulcipher and Megan and Mitchell Griffis. It is also key to note that he was a avid cribbage player as well, and loved the banter between his grandsons and friends during the heat of the game. No matter, what he usually came out on top. He was preceded in death by his wife of 58 years Marilyn, His parents John W. and Thresa, his brothers Ralph and George and sister Doris Sleder. Funeral services will be held at Reynolds-Jonkhoff funeral home on Friday April 18th at 11:00 am. Visitation will be Thursday April 17th from 5-8 pm and at 10:00 am on Friday prior to the service at Reynolds-Jonkhoff. He will be laid to rest in Acme Cemetery at a later time. In lieu of flowers please consider donations to the John Ritter Foundation for Aortic Health.

The family of John R. Pulcipher created this Life Tributes page to make it easy to share your memories.