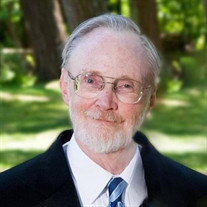 John R. Hughes Jr. passed away at his Interlochen home on August 13, 2021. He was born in Washington DC in 1944 to Roland and Peggy Hughes. For someone who loved horror movies, it seems only fitting that he passed away on Friday the 13th. He is survived by his wife Susan; sister Peggy (Burt) of Cadillac; and his six children, Debby (Jason) of Eden Prairie, MN, Barb (Kevin) of Morton, IL, Cindy (Eric) of Thomasville, GA, Nancy (Rich) of Olathe, KS, Brian of Overland Park, KS, and Linda (Sean) of Renton, WA; as well as his 11 grandkids. He was preceded in death by his parents. In May 1967, he married his high school sweetheart, Susan. They met sitting next to each other at a National Honor Society event while attending Ferndale HS and spent the next 54 years navigating life’s adventures together. In 1966, John joined the US Air Force and proudly served his country in Vietnam. When he returned from Vietnam, he graduated from University of Michigan, College of Engineering, with Bachelor’s and Master’s degrees in Meteorology. He began his 30-year career with the National Weather Service which included introducing technologies such as NORAD and NEXRAD. He was an avid college football fan–hosting the family college football “Pick’em” for several years, always rooting for his Wolverines. In 2001, John retired “Up North” to his house in the woods and returned to his lifelong passion for aviation. He was actively involved in the Civil Air Patrol, Wings of Mercy, Experimental Aircraft Association, and Lifeline Pilots. John, ever the engineer with meticulous attention to detail, built Heathkit computers before anyone knew what personal computers were, rebuilt motorcycles, installed tongue & groove ceiling, and constructed his steel barn, which he called a giant erector set. He had a can-do attitude and an ability to learn and complete anything he put his mind to. John’s sense of adventure was formed at an early age traveling with his military parents and he passed his adventurous spirit onto his family. From annual family 2-week cross country camping vacations with 6 kids in a pop-up trailer, to scuba diving adventures, and of course his love of flying, including piloting a 30-hour cross-country trip to Seattle. He was up for all of it until life slowed him down. A funeral service will be held at the Interlochen Bible Church, 2995 M-137, Interlochen, MI 49643, 11AM Thursday, August 26th. Military honors will follow at Creekside Crematory, 801 Industrial Cir., Traverse City. Afterwards, a light lunch at the Golden Fellowship Hall in Interlochen will be served. In lieu of flowers, consider memorials in John’s honor to Wings of Mercy, https://wingsofmercy.org/, Lifeline Pilots, https://lifelinepilots.org/, or to Angel Flight of Michigan, https://www.angelflight.com/donate. Memories and condolences may be shared on John’s tribute page, www.reynolds-jonkhoff.com

John R. Hughes Jr. passed away at his Interlochen home on August 13, 2021. He was born in Washington DC in 1944 to Roland and Peggy Hughes. For someone who loved horror movies, it seems only fitting that he passed away on Friday the 13th.... View Obituary & Service Information

The family of John R. Hughes created this Life Tributes page to make it easy to share your memories.

John R. Hughes Jr. passed away at his Interlochen home on August...