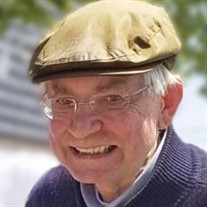 John “Jack” Michael Rollert, 77, passed away peacefully on February 21st, 2021 at the French Manor South in Traverse City. He was born on September 18th, 1943 in Flint, Michigan. His father, Edward Rollert, was an innovative Executive Vice President at General Motors until his early death at the age of 57. His mother, Helen Rollert Riordan, lived to the age of 100 and was a generous philanthropist. For over 40 years, the Rollert family owned Maple Bay Farms in Yuba, MI. Originally a dairy farm, in 2012 it was transformed by the Grand Traverse Regional Land Conservancy into a sunflower installation with public beaches and hiking trails. Additionally, the Rollert name adorns the Munson Medical Center Emergency Room across the street from French Manor. Jack was able to see it from his window in the last months of his life. Jack attended The Cranbrook School in Bloomfield Hills, MI graduating in 1961 before heading to Duke University where he had close friends and was a member of the Phi Delta Theta Fraternity. His fraternity brothers jokingly referred to him as “Fangio” after the legendary Formula 1 driver Juan Manuel Fangio for Jack’s penchant for fast driving. After finishing his degree at Duke, Jack attended the University of Michigan where he earned a Master’s degree in bioengineering. From there, he went on to attend Wayne State Medical school. It was during Jack’s time at Wayne State that he began to experience the onset of mental illness. A confusing and mysterious affliction at the time, Jack was not officially diagnosed until years later when doctors determined he had schizophrenia. This would be an obvious challenge for anyone, but given the love and support of Jack’s family, he was able to continue on with his life in relative comfort and contentment. He was even able to work throughout the 1970’s and was proud that he wrote the first computer programs for the cancer department at Wayne State Medical School as well as creating the first ever computer systems for the state of Michigan. For several decades, Jack’s guardian was his older brother, Edward David Rollert, who, along with his mother, made sure Jack was well taken care of and his needs attended to. When Jack’s son, John Kelley Rollert (whom he always referred to as “Ace”), moved back to Traverse City in 2001, he also took on the care of Jack, along with his wife, Mary Rollert. Mary was affectionately known as the “Jack Whisperer” for her ability to convince Jack to do things he wasn’t necessarily comfortable with. And although Jack’s daughter Ginger Rollert lived in New York City, she made an effort to stay connected to him by phone and visiting him every summer with her family. For 12 years, Jack lived in a boarding house in Traverse City run by a woman named Jodi Frenchi. “3 squares a day” was important to him so he regularly affirmed Jodi’s spectacular cooking skills and wonderful meals. Jack was comforted by routine so he had a strict regimen of walks into town to buy his beloved Mountain Dew and Hershey bars. Jack also took regular cab rides to Orvis Streamside where he purchased his favorite coats and sweaters as well as stopping at Golden Shoes where the staff all knew him well. He typically bought two of everything because for Jack, “you always need a back-up”. He also enjoyed repeated visits, often with family, to Mode’s Bumsteer for his French dip or Don’s Drive-In for a burger and milkshake. When Ms. Frenchi retired, Jack moved to Hawthorne Cottage at the Grand Traverse Pavilions where he lived for 8 years, still enjoying his relative independence and the care of his family. His final months were spent at French Manor South. At both residences, he was provided wonderful accommodations, meals, and most importantly, exceptional love and care from the staff. The family would especially like to acknowledge the committed care of Jack’s psychiatrist, Dr. Neal H. Fellows, the warmth and compassion of MaryLee Pakieser at NPallative Care as well as the caregivers at Hospice of Michigan. Finally, a heartfelt thank you to the numerous people of the Traverse City community that nodded and said “hello” to Jack as he walked his many miles through the city streets. Jack, a gentle and sweet soul, is survived by his brother Edward David Rollert (Elizabeth); former wife, Lanne Rollert Tuohy; daughter Ginger Ann Rollert (Gregory Abbey); son John Kelley Rollert (Mary); and four grandchildren: Paris Rollert, Dakota Ticheli, Savannah Abbey and Sage Abbey. In accordance with Jack’s wishes cremation has taken place. A private family celebration of Jack’s life will be held at a later date. In lieu of flowers, those planning an expression of sympathy may wish to consider a memorial donation to Northern Lakes Community Mental Health, attention Laurie Fischer, 105 Hall St., Suite A, Traverse City, Michigan, 49684. Please feel free to share your thoughts and memories with Jack’s family at his tribute page at www.reynolds-jonkhoff.com. The family is being cared for by the Reynolds-Jonkhoff Funeral Home and Cremation Services.

John &#8220;Jack&#8221; Michael Rollert, 77, passed away peacefully on February 21st, 2021 at the French Manor South in Traverse City. He was born on September 18th, 1943 in Flint, Michigan. His father, Edward Rollert, was an innovative Executive... View Obituary & Service Information

The family of John Michael Rollert created this Life Tributes page to make it easy to share your memories.