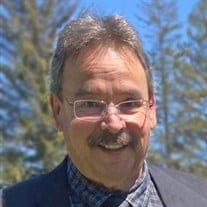 TRAVERSE CITY - John Thomas Sees, 59, passed away unexpectedly on Monday, May 24, 2021. John-known to many as “Big John” or “BJ”-had been living each day feeling eternally grateful, inspired, and blessed after a successful liver transplant last year. Son of John Henry and Katherine Masterson Sees, John was born in Winston-Salem, North Carolina and grew up in Burlington with his parents and sister Kathy. After graduating from St. Francis Preparatory School (Spring Grove, PA) and attending the University of North Carolina at Chapel Hill, John joined the Department of the Navy and spent a decade working in the Charleston Navy Yard as a civilian heavy equipment and crane operator, servicing the nuclear submarines, cruisers, and destroyers of the U.S. Atlantic Fleet. With the impending closure of the Charleston shipyard in the 1990s, John-like many other naval workers-moved on to a new career. His was restaurant and nightclub management. From Charleston he moved to Johnson City, TN, and then Sumter, SC. In September 1998, while in Sumter, John reconnected with the love of his life, Katryna Glettler. The two had met in 1977, in Tehran, Iran. John had come to visit his father for the summer-their parents worked together at American Bell, AT&T’s international subsidiary. The teenagers remained long-distance sweethearts through high school and college, until life led them down separate paths. Now 17 years later, John found Katryna’s phone number on the internet and called her-she was living in New York City. After a few months of expensive phone bills and plane tickets, John moved from South Carolina to New York. They were married in March the following year. In Manhattan John managed Houlihan’s Restaurant and Bar and helped London-based Pret-a-Manger expand its US market, opening several sandwich shops around town. The two enjoyed city life, living in a shoebox six-story walkup apartment on the Upper East Side with their rescue pup Kayla. In addition to many happy, fond memories of New York, John also always held reverence for the tragic events and aftermath the couple witnessed during the 9/11 attacks. In 2008, following the loss of Katryna’s father, John and she moved to Traverse City to be closer to her Mom. While John will always be a Carolina Blue Tarheel at heart, he loved living in Northern Michigan and quickly became an avid UofM fan. Pup Kayla was soon joined by Kiki and Kirby and kitty Kodi, so while John and Katryna were never blessed with children of their own, their home is always full of the pitter patter of fur-baby feet. At the core of John’s being, he took great pride in his work as a Freemason-he had originally joined Masonry while in in Charleston in 1991, and in 2011 joined Traverse City Masonic Lodge 222. He deeply valued the Masonic virtue of charity, and truly loved the time he and his brothers dedicated to civic projects, charitable fundraising, education and scholarships, and supporting veterans. He believed we all can make a difference and he wanted to leave the world a better place. Surviving John is his wife Katryna Glettler, daughters Paige Sees and Andrea (Cody) Preciado, father John H. (Bobbie) Sees, sister Kathy (Tim Ames) Machala, and a large loving family of Glettler in-laws. He was preceded in death by his mother Katherine Masterson Sees. Ann Franks is the mother of his children from a previous marriage. The family would like to thank the Liver Transplant Team at the University of Michigan and his donor family for giving John the gift of this past year to share with Katryna, family and friends. There will be a memorial service at 11 am, on Saturday, June 5, 2021 at the Reynolds-Jonkhoff Funeral Home, with visitation from 10-11 am. Refreshments and a chance to celebrate John’s life will immediately follow at Traverse City Masonic Lodge 222 (13360 S. West Bay Shore Dr.). In lieu of flowers, donations can be made to the Traverse City Lodge 222 Almoner’s Fund (Wilson D. Brott, Almoner, PO Box 4155, Traverse City, MI 49685) or the University of Michigan Transplant Patient Emergency Fund (Michigan Medicine Office of Development, 1000 Oakbrook Dr., Ann Arbor, MI 48104; 734-764-6777; victors.us/johnsees. The Almoner’s Fund assists Masons and their families in need. The UofM emergency fund helps patients and families cover the costs of medication, food, and transportation. John and his family are being cared for by the Reynolds Jonkhoff Funeral Home.

The family of John Thomas Sees created this Life Tributes page to make it easy to share your memories.