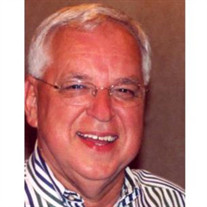 John Michael Shephard, 81, of Williamsburg, MI departed his earthly home on November 24, 2021 at Munson Medical Center. He was born on September 25, 1940 in Emmett, MI, the son of John Eugene and Mary (Hodowanes) Kocinski. On June 20, 1964 John married his best friend and college sweetheart, Nina Faye Wood of Taylor, MI. The enjoyed thirty-nine years of marriage together ending with Nina’s passing in 2003. John graduated from high school in Memphis, MI in 1959 and then went on to earn an Associates in Arts degree from Northwestern University in Evanstown, IL, a Bachelors in Science degree from Adrian College and then a Masters Degree in Biochemistry and Cytogenetics from Eastern Michigan University in Ypsilanti, MI. He was employed with several hospital and clinics in the Detroit area in the fields of clinical chemistry, early cancer detection methodology, chromosome mapping and juvenile genetic disorders. In 1976, John relocated to the Traverse City area where he became employed by Chef Pierre Bakery and then by Sara Lee Corporation in the capacity of Food Safety and Quality Assurance Manager. He successfully represented the company in numerous legal product quality issues at court, and he was the primary contact for most FDA government product safety compliance issues, as well as the contact person for all Kosher organizations purchasing bakery products from the company. John was an avid fisherman, a fine arts aficionado, a consummate reader of non-fiction and a good friend to all who knew him. He loved in-depth intellectual conversations on many subjects and he always valued learning something new from each discussion. John was a Christian man who loved his Lord with all his heart, as well as an interesting and fun loving individual who enjoyed adventures of many kinds. He traveled to several foreign countries with his wife on vacations, as well as alone on business. John is survived by his son David M. (Schatzie) Shephard of Irons, MI; grandson Tyler M. Shephard of Williamsburg, MI; granddaughter Aryana P. Shephard of White Cloud, MI as well as sisters Sylvia A. Nash of Berkley, MI, Pennie S. Bartee of Lexington, MI and brothers Dale R. Shephard of Scottsdale, AZ and Thomas C. Shephard of Palm Springs, CA. He also leaves behind many beloved nieces and nephews who reside in Michigan, Ohio and in North Carolina. He was preceded in death by his wife Nina, parents and grandparents and elder sister Norma J. Gothro from Warren, MI. Arrangements are with Reynolds Jonkhoff Funeral Home and Cremation Services. Cremation has taken place. John’s family will hold a private memorial service at a later date. Memorial contributions may be made to A.C. Paw or to the Cherryland Humane Society in John’s name.

John Michael Shephard, 81, of Williamsburg, MI departed his earthly home on November 24, 2021 at Munson Medical Center. He was born on September 25, 1940 in Emmett, MI, the son of John Eugene and Mary (Hodowanes) Kocinski. On June 20, 1964 John... View Obituary & Service Information

The family of John Michael Shephard created this Life Tributes page to make it easy to share your memories.