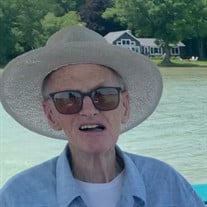 John Eldred Spring, 86, of Empire, Michigan passed away peacefully on Tuesday, July 13, 2021 at his home with his family by his side. John was born on November 1, 1934 to the late Eldred and Pearl (Luce) Spring in Chicago, Illinois. On May 17, 1959, John married the love of his life, Sita Maria Kishindas in Panama. John honorably served his country in the United States Army. He graduated from Glenbard High School in Lombard, IL and attended Bradley University in Peoria, IL earning his Bachelor’s degree in teaching. He went on to earn his Master's degree and then pursued his career as a teacher. He began his career at West Branch High School in West Branch, MI and in 1963 moved to the newly formed Mona Shores High School District in Muskegon, MI where he taught Shop class until retiring in 1993. In 1998, he and Sita moved to Empire. John was a member of St. Philip Neri Catholic Church and worked for the church Hospitality Committee, the Empire Lions Club, and the Noontiders. He volunteered at the museum in Empire, the local food pantry and the Glen Lake Women's Club Art Fair. John had a passion for woodworking, he made countless pieces of furniture for his family and friends. He also enjoyed photography, his pontoon boat, fishing, participating in the neighborhood boat flotilla and helping the neighbor ladies as a handyman. During the summer time between school years, John taught drivers training classes to teenagers and provided him with an endless supply of funny stories and near misses that he liked to share. John had a dry sense of humor and was known for “telling it like it was.” If there was work to be done or people in need everyone knew you could always count on John. He will be greatly missed. John is survived by his loving wife of 62 years, Sita; their children Duane Spring, Donald Spring, David Spring and Michele Goosen. Also surviving are his grandchildren Shelby (Christopher) Vergatos, Stephen, Justin, Rion, Kendal (Jacob) Awiszus, Bryce and Kadyn; as well as great-grandchildren Milo and Landon. A celebration of John's life is being planned for a later date. Those planning an expression of sympathy may wish to consider a memorial donation to the Salvation Army, 1239 Barlow St, Traverse City, MI 49686, the Hospice of Michigan, 10850 E Traverse Hwy Ste 1155, Traverse City, MI 49684, or Parkinson’s Foundation, 30400 Telegraph Road, Suite 150, Bingham Farms, MI 48025. Please feel free to share your thoughts and memories with John’s family at his tribute page at www.reynolds-jonkhoff.com. The family is being cared for by the Reynolds-Jonkhoff Funeral Home and Cremation Services.

John Eldred Spring, 86, of Empire, Michigan passed away peacefully on Tuesday, July 13, 2021 at his home with his family by his side. John was born on November 1, 1934 to the late Eldred and Pearl (Luce) Spring in Chicago, Illinois. On May 17,... View Obituary & Service Information

The family of John E. Spring created this Life Tributes page to make it easy to share your memories.