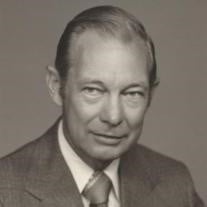 Traverse City - John D. Vicary, 91, of Traverse City passed away November 23, 2012 at Orchard Creek Skilled Nursing. Jack was born on August 23, 1921 in Detroit to the late John and Mary Belle (Mills) Vicary. On April 5, 1947 Jack married Edna May McMillan in Windsor, Ontario. Together they have shared 65 years of marriage. Jack served honorably as a member of the United States Navy from 1944 to 1964. He served in the Battle of Okinawa and retired as Lieutenant Commander. Concurrent with his time in the service he was an engineer for Chevrolet. Jack retired in 1983 when he and Edna moved to Traverse City. In his spare time he loved fishing and boating. He enjoyed travelling to Canada for fishing trips and vacationing across the United States. He journeyed to all 50 states with the exception of Alaska. Jack is survived by his wife Edna, three daughters Janis (Michael) Fitzgerald of Port Orchard, WA, Marilynn Flynn of Alamogordo, NM, Patricia (Todd Nelson) Vicary of Pleasanton, CA, brother Donald Vicary of Burlington, ON, grandson Tyler (Michelle) Martin of Kirkland, WA, grandson Derek Nelson of Pleasanton, CA, and great granddaughter Cecelia Martin of Kirkland, WA. Jack was preceded in death by his parents, brother Robert, son-in-law Michael Flynn and sister-in-law Shirley Vicary. Visitation will be held on Friday, November 30, 2012 from 12 noon until 1 pm at the Reynolds Jonkhoff Funeral Home. The funeral will begin at 1 pm with Rev. Becky Chamberlain leading the service of remembrance and military honors provided by Cherryland VFW Post #2780. Interment will take place at Oakwood Cemetery. Memorial contributions may be directed to The American Cancer Society.

The family of John Douglas Vicary created this Life Tributes page to make it easy to share your memories.