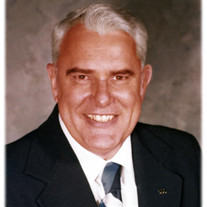 John Arthur Younker, 93, of Traverse City passed away Friday, July 13, 2018 at Culver Meadows Adult Foster Care, surrounded by his loving family. John was born April 20, 1925 to the late Arthur and Helen (Blondin) Younker in Cleveland, OH. He attended St. Ignatius School, in Cleveland, and St. Agnes High School in Detroit, MI prior to entering Sacred Heart Seminary in Detroit. John left Sacred Heart to enlist into the Marine Corp, serving in the South Pacific Theater through the end of WWII. Upon honorable discharge, John moved to Chicago, and attended DePaul University, obtaining his Masters Degree in School Administration. He became a principal for the Chicago Public School system where he worked until his retirement. John met the love of his life, Mary Alice Sullivan in Chicago, and on September 18, 1948, they were married at Visitation parish on the southwest side of Chicago, IL, then moved to the suburb of Oak Lawn where they raised 3 children. The family, having the privilege of summers off as Mary Alice was a teacher, enjoyed traveling and camping, and most often would head to Northwestern Lower Michigan and Leelanau County, where they thoroughly enjoyed all it had to offer. This led John and Mary Alice’s decision to relocate to Empire for their retirement. They became members of St. Philip Neri Catholic Church in Empire and later, a move to Traverse City included a move to Immaculate Conception Parish. John was an honest, generous, hardworking man, filled with faith in God and his Catholic upbringing. He always put family first, and looked out for the wellbeing of others. Many, many happy stories are told when cousins get together about how the family “grew overnight”, the vacations enjoyed together, and John’s cardinal ‘dukie bag’ rule. Sports were something John also enjoyed. Besides swimming, he was an avid hand ball player, tried his had at tennis for a while as well as golf in retirement, always enjoyed a game of pick up baseball and enjoyed cheering on the Indians, Tigers, White Sox (and anyone playing the Cubs). He also would take his fishing pole down to their dock on South Bar lake to see if the fish were biting. Rather than bringing his “catch” to the table, he made sure the fish were well fed from his bait bucket. He and Mary Alice were very proud of their three children. All college graduates, Jude and Mary Helen chose to reside in the Grand Traverse area, and John, with his wife Sue, retired to northern Wisconsin, all having an appreciation for the outdoor Northwoods lifestyle. With Mary Helen close by, she was able, on many occasions, to join their camping vacations, visiting Canada, Texas, California, and New England. They took great joy in their granddaughter Megan, and John was known to surprise her by attending some local swim meets to watch her compete. He was preceded in death by his wife Mary Alice Younker; his parents; sisters Margaret Reagan and Rosemary Keating; and brothers-in-law Harry Reagan and Gerry Keating. John is survived by his daughter Mary Helen Younker of Traverse City; sons Deacon Jude and Susan (Matheson) Younker of Traverse City and John and Sue (Meredith) Younker of Eagle River, WI, and grand daughter Megan Younker. A visitation will be held on Monday, July 23, 2018 from 5 p.m. to 8 p.m. at the Reynolds-Jonkhoff Funeral Home, with a prayer service at 7 p.m. A Mass of Christian Burial will be held on Tuesday, July 24, 2018 at 11 a.m. at Immaculate Conception Catholic Church, with visitation beginning at 10 a.m. Father Anthony Citro will officiate. Those wishing an expression of sympathy are encouraged to direct contributions to: Immaculate Conception Food Pantry, 308 North Cedard Street, Traverse City, MI 49684.

The family of John Arthur Younker created this Life Tributes page to make it easy to share your memories.