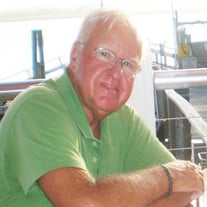 MONSON, Jon Karl, “Jack” age 80, passed away Tuesday, September 12, 2017 surrounded by his family. He was born in Cadillac, MI on February 18,1937. He graduated Cadillac High School in 1955 and Northwestern Michigan College in 1957, and attended Michigan State University. While at NMC he met his wife, Mary Monson (Fifarek), and they wed in 1958. Jack was an active member of the American Legion Post 399, and a long-time member of the First Congregational Church. He was an owner of Traverse Bay Gravel for over 50 years, and one of the things he loved the most was to play with his loader and dump truck on his farm and gravel pit on the Old Mission Peninsula. His interests were many. Jack was an avid traveler, and enjoyed visiting many locales around the US and abroad with his wife, and spent his winters in North Ft. Meyers and St. Augustine Beach, Florida. He was an antique car enthusiast, an animal lover, and a real people person; everyone knew Jack  he had a big heart and never met a stranger. Jack was preceded in death by his parents, Beatrice and Carl Monson, in-laws, William “Rocky” and Marie Fifarek, brother in law, William Fifarek, and nephew, Nicholas Fifarek. He is survived by his college sweetheart and wife of 59 years, Mary, daughter, Lisa Monson (Keith Hayes), son, Jon Kurt Monson (Signe Pihlstrand), nephews, Chris and Josh Fifarek, and “grandson,” Jeff Bensley. Memorial services will be held at the First Congregational Church Chapel in Traverse City on Friday, September 15, 2017 at 2:30 pm with Dr. Gary Hogue officiating. The family will receive friends at the church one hour prior to the service. The family would like to express their thanks for the wonderful help and care given by his many caregivers at Munson Home Health, Great Lakes Therapy, and Cowell Family Cancer Center. If desired, friends may make memorial contributions to the Cherryland Humane Society, or charities of their choice. Condolences may be sent to the family at www.reynolds-jonkhoff.com. The Family is being cared for by the Reynolds-Jonkhoff Funeral Home and Cremation Services.

The family of Jon "Jack" K. Monson created this Life Tributes page to make it easy to share your memories.