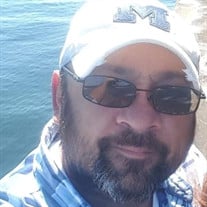 Jon Nelligan, 43, passed away July 5, 2021 at Munson Medical Center. A massive heart attack on May 10th had him admitted but with several unexplained health complications and family and friends surrounding him, Jon left us to join his grandparents, Albert and Dorothy Salisbury and Dorothy Hansen. Born, Jon Patrick Nelligan, on May 4, 1978 in Traverse City to Patrick and Doris (Salisbury) Nelligan. One of four kids growing up, (half siblings – Walter Edinger, Dalynn (Edinger) Keep and sister, Dorthia Nelligan), Jon thrived in his family. He was a licensed contractor who took great pride in the trade and worked on many homes throughout the area. Jon’s work ethic brought his business projects that are viewed by others in awe. Josh Koon, a brother-like friend of Jon’s since they were young, will attest to the spirit that Jon put into everything he did which was rarely done without a piece of U of M apparel on. He was an avid enthusiast of sports and engaged in many. His love for the outdoors and of course Michigan football was beyond measure. Whether it was watching a game on TV, or in person, snowmobiling, canoe & kayaking, fishing or hunting, he was always up for an adventure. Jon’s activities were seldomly done alone. A day with his son, Jonathon “LJ” or time spent with fiancée, Sarah Pavelka and her son, Dylan, Jon was always enjoying life! Much of his off time included his nieces and nephews. Eric Bedrick and his children, Aubrey and Easton, Patrick Bedrick, Delaney Bedrick, Alic Nelligan and his daughter Miah, Celest Harrell will miss the annual 4th of July river trip Jon organized each year. Like them, many friends will cherish the times they had with Jon because as a loyal, caring and fun guy who encouraged people to gather, those campfire chats will be a void. The service celebrating Jon’s life will be held on July 22nd at 11am at the Reynolds Jonkhoff Funeral Home. The family would like to welcome you to the visitation starting at 10a. Jon would want everyone to wear Maize and Blue so please feel comfortable when you come dressed in U of M and prepare a memory to share. A luncheon will follow at the Eagles. Memorial contributions are being directed to a Trust that is established for LJ’s future. Envelopes will be available at the funeral home. The family would like to thank Lindsey at Reynolds Jonkhoff for her guidance in making this very difficult situation bearable. Our hearts are so broken in our loss but we know that Jon will feel at peace now.

Jon Nelligan, 43, passed away July 5, 2021 at Munson Medical Center. A massive heart attack on May 10th had him admitted but with several unexplained health complications and family and friends surrounding him, Jon left us to join his grandparents,... View Obituary & Service Information

The family of Jon Patrick Nelligan created this Life Tributes page to make it easy to share your memories.