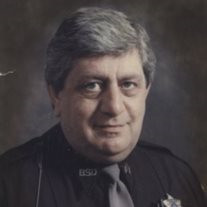 Lake Ann - Joseph Anthony Barone, 67, of Lake Ann, passed away peacefully at his home on March 15, 2014 with his loving family at his side. Joe was born on Feb. 28, 1947 in Donora, PA., to the late James Louis and Margaret (Hosdulik) Barone. In 1966 he enlisted and honorably served our country as a Sargent in the United States Marine Corps. He trained and served in law enforcement as a Detroit police officer and later relocated to northern Michigan where he served as a Sheriff deputy for Benzie County for 33 years. He married Patricia Hanba on June 8,1973 in Pennsylvania, and the couple celebrated 41 years of marriage together living in Benzie County. Joe especially enjoyed cooking and baking and was the "chef" of his kitchen with Pat assisting as his "sous chef". He also enjoyed camping, riding horses and the gun range. He was an active Life Member of the Benzie Area Masonic Lodge #444. He is survived by his wife, Patricia; a daughter, Kelly (Wayne) Downs of PA.; mother-in-law, Florence Hanba; brother-in-law, Gerald (Joyce) Hanba of IN. Joe was preceded in death by his parents James and Margaret (Hosdulik) Barone; a brother, Tommy Barone and father-in-law, Walter Hanba. Visitation for Joe will take from 4:00 to 8:00 p.m. on Tuesday, March 18 at at the Reynolds-Jonkhoff Funeral Home. The Rosary will be prayed at 7 PM with Deacon Rene Hoenscheid officiating. The Mass of Christian Burial will be held at 11:00 a.m. on Wednesday March 19, 2014 at St. Francis Catholic Church with a visitation one hour prior to the Mass. Father Ken Stachnik will preside, assisted by Deacon Rene. Military honors will be offered by the Honor Guard of VFW Cherryland Post 2780. Interment will be at Holy Sepulcher Cemetery in Southfield. Those planning an expression of sympathy may wish to consider a memorial contribution to the American Diabetes Association, 1550 E. Beltline, S.E. Suite 250, Grand Rapids 49506 (www.diabetes.org) The American Heart Association, 3940 Peninsular Drive S.E., Suite 180, Grand Rapids, 49546 (www.heart.org) or Munson Hospice House c/o Munson Healthcare Regional Foundation, 1500 Medical Campus Drive, Traverse City, 49684 (www.munsonhealthcare.org/foundation) . Please share your memories with the family by way of Joe's online guest book at www.reynolds-jonkhoff.com. The family is being served by Reynolds-Jonkhoff Funeral Home and Cremation Services.

Lake Ann - Joseph Anthony Barone, 67, of Lake Ann, passed away peacefully at his home on March 15, 2014 with his loving family at his side. Joe was born on Feb. 28, 1947 in Donora, PA., to the late James Louis and Margaret (Hosdulik) Barone.... View Obituary & Service Information

The family of Joseph Anthony Barone created this Life Tributes page to make it easy to share your memories.