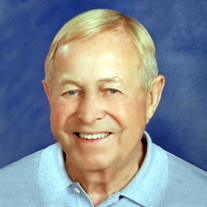 Traverse City - Joseph Milton Gardner, 87, of Traverse City and formerly of Grosse Pointe Park, MI, passed away February 9, 2016 at Munson Medical Center. Joe was born on July 17, 1928 in Cheboygan to the late T.M. and Bernice (Lovelly) Gardner. His family moved to Detroit where Joe attended Eastern High School. Upon graduation, he was nicknamed “The Prince of Fun”. On September 2, 1950, Joe eloped with his high school sweetheart, Joy (Lowther) in Angola, IN. Together they raised their family in Grosse Pointe and later relocated to Traverse City in 1980. Joe enjoyed a long career working for the General Electric Company for 43 years and retired in 1990 . He was a member of Grace Episcopal Church, the Elks Lodge #323, the Elfun Society, the Nomads Travel Club, the Lost Lake Woods Club in Lincoln and the Traverse City Golf and Country Club. He will be deeply missed by all. Joe was preceded in death by his wife Joy of 62 years in 2012. Joe is survived by his children, Janet (JP) Pachnik of New Haven, MI, Jack (Cecilia) Gardner of Dexter, MI, and Jeff (Mary Beth) Gardner of Traverse City, 7 grandchildren, Kate, Russ, Joe, Maggie, Molly Kate, Caroline, and Lena , and great-grandchildren, Niko, Weston, and A.J., and many other loving family members and many friends. Joe enjoyed telling jokes and sharing stories with all who would listen, and often said that his obituary would read “The Prince of Fun is done”. A private family memorial service will be held at a later date. Memorial contributions may be directed to Munson Hospice or to Grace Episcopal Church in Traverse City.

The family of Joseph Milton Gardner created this Life Tributes page to make it easy to share your memories.